Latinx people deserve a place in philanthropy because our community values are rooted in giving, especially the kind of giving that isn’t monetary.

When I was 6 years old, my family embarked on a journey that would take us from our native land of Mexico all the way to a mitten state called Michigan. Although every immigrant’s story is distinct, our parents’ motives for leaving behind everything they ever knew was due in part to  the American Dream: the desire for more opportunities and a better life.

Pursuing this dream landed us in an affluent suburb of Detroit, where I was able to continue my education in a school district where the majority of students did not speak my language or shared my cultural heritage. This came as no surprise to us, considering the suburb was 76% white. Fast forward a couple of years though, when I found myself at a university with an undergraduate student population of more than 35,000. Before I got there, I pictured myself immersed in a diverse community and environment, but I was wrong. The student population at the university was 67% white, and the department where I studied was also overwhelmingly white.

Now that I’m starting a career in fundraising, I find myself in the very same spot I’ve been in for 22 years. I’m always the only Latina woman when I attend fundraising events or meetings, and I rarely see Latinx individuals in philanthropic leadership positions. The fact of the matter is that Latinx communities are wildy underrepresented in this sector — as staff members and donors. Despite being 18% of the US population, Latinxs make up only 5% of nonprofit staff employees. Even worse, less than 4% of Latinxs serve as trustees at foundations and less than 3% are CEOs.

I believe that the future of philanthropy relies on taking a community-centric approach. This means placing the community the nonprofit is serving at the center. It also means acknowledging philanthropy’s dark past and looking towards the future with a social and racial justice lens. It is the only way we can begin to collectively heal and bring equity to our communities. A key principle of community-centric philanthropy is valuing everything people can bring to the table besides money. This can take place in the form of time, items, talent or connections. Latinx people deserve a place in philanthropy because our community values are rooted in giving, especially the kind of giving that isn’t monetary.

Latinx people are born to be charitable individuals. It’s in our blood.

Historically, Mexicans have the Gran Círculo de Obreros de México (the Great Circle of Mexican Workers), a mutual aid society that had over 28 branches in Mexico by 1875. When Mexican workers began immigrating to the United States, they brought with them the mutualista model and established groups of support. These groups offered immigrants with more than just economic security: They could also receive education, sickness and burial insurance, libraries, and leadership opportunities. Additionally, these were spaces where immigrants could create a sense of community by offering spaces for social and cultural activities and events.

Then there’s the role of the church in Latin America. In Chile, Father Alberto Hurtado founded Hogar de Cristo (Christ’s Home) in 1944. It not only provided shelter for the homeless, but became a place where the community could receive job training in carpentry. Then 32 years later in 1976, The Vicariate of Solidarity was formed by Cardinal Raul Silva Henriquez and provided legal, medical, and humanitarian assistance to Chileans during Pinochet’s oppressive regime.

And at the end of the day, that’s what philanthropy should be about … love of humankind.

Our sense of community and generosity also shows in our cultural traditions. In quinceañeras (15th birthday celebrations for girls), family members and friends will often ‘sponsor’ different aspects of the party. People will offer to help contribute for the girl’s dress, cake, venue — you name it!

We even demonstrate our values in giving to our departed loved ones during Día de los Muertos. Communities gather around intricate and beautiful ofrendas, or altars, which are created in remembrance of those who have passed. These altars often include items such as toys, flowers, calaveras, the deceased’s favorite food and drink, and of course the iconic Día de los Muertos bread.

Latinx people are some of the most charitable individuals I know, especially when it comes to food. Food is a culturally important aspect of life for Latinx people, and it shows. Walk into a Latin American household and you’ll be greeted with open arms and a warm plate of food. Attend any Latinx barbeque, and dads will offer you a piece of carne asada as it’s coming off the grill. I remember every time I used to come home from college, my mother would make me my favorite meal regardless of how much time or effort it took. That’s love right there.

And at the end of the day, that’s what philanthropy should be about … love of humankind.

3 ways to include Latinx communities in philanthropy

So now you’re probably asking yourself: How can I include more Latinx communities — whether in my programming or as part of my nonprofit’s staff or donor roster? Here are three ways:

Tip 1: Hire from a more diverse pool of people

If you’re in a position in your organization that handles hiring, make sure you’re putting an effort to get a diverse pool of candidates. (I want to be clear that this does not mean asking your Latinx or BIPOC colleague if they can share your job posting with their networks and assist in the search.) It means that, if you have the budget, consider hiring a recruiting firm that centers their work around diversity, equity, and inclusion.

It’s also important that if you’re hiring interns in the nonprofit sector, that those opportunities are paid. Offering unpaid internships will result in a very specific kind of individual applying for the position — a student who is privileged enough to take an unpaid internship.

Many communities of color, including Latinx communities, lack significant household wealth, resulting in families of color struggling to put their children through college. It’s young Latinx people who oftentimes can not afford to take unpaid opportunities, which leaves them out of the candidate pool.

Can’t afford to offer paid internships? Connect with your local college or university so students can receive class credit in exchange for an internship — or offer a low-commitment volunteer opportunity instead. (I got into fundraising because I was hired as a development intern. This position not only paid me, but it created a path that allowed me to immerse myself in this work.) We need to make sure we create this path for others.

Tip 3: Creatively expand your donor base

Lastly, if you work as a fundraiser, take a look at who gives to your organization. If this group is primarily white, then there needs to be more of an effort to attract a greater racial diversity of donors.

It’s also crucial to have different strategies for recruitment, oriented around the different economic backgrounds Latinx individuals come from. For middle class Latinx communities, try translating your nonprofit communications in Spanish if you’re not doing this already. After all, how are non-English speakers supposed to connect with your mission and contribute if they can’t understand it?

For affluent Latinx people or families, simply including them in philanthropy can be a monumental step. According to Radiant Strategies research on high net worth donors of color, wealthy BIPOC individuals are highly networked in professional or fraternal organizations, but rarely in philanthropic communities or with each other. Research also found that donors of color are fairly new to formal, American-style models of giving.

There’s great opportunity here. Seek out Latinx donors, get to know them, and ask them to be involved in your work. It will be the start of an incredible partnership.

Do I think there is a lot of work that needs to be done in including Latinx people in the world of philanthropy?

However, as a young fundraiser of color, I also look towards the future with hope.

I’ll leave you with a quote from my favorite Chicana writer Sandra Cisneros:

“The older I get, the more I’m conscious of ways very small things can make a change in the world. Tiny little things, but the world is made up of tiny matters, isn’t it?”

I look forward to being a part of a movement that strives to fix these tiny matters in philanthropy. 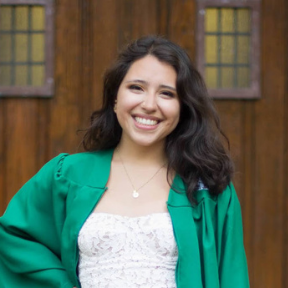 Andrea Cota Avila (she/her) is a 1.5 immigrant from Mexico based in Denver, Colorado. She currently works as a development coordinator for the Colorado Immigrant Rights Coalition, a nonprofit organization that advocates for all immigrants regardless of their immigration status. Andrea defines herself as a new fundraiser, community advocate, hiker, yogi, and lifelong learner. When she’s not going on an adventure, you can find her tending to her many plants or finding the next activity that keeps her busy. You can connect with her on Facebook, Instagram, or email at andrea@coloradoimmigrant.org.