Why must the white cis nonprofit workers angry react to all my posts? Ep: Always challenge transphobia 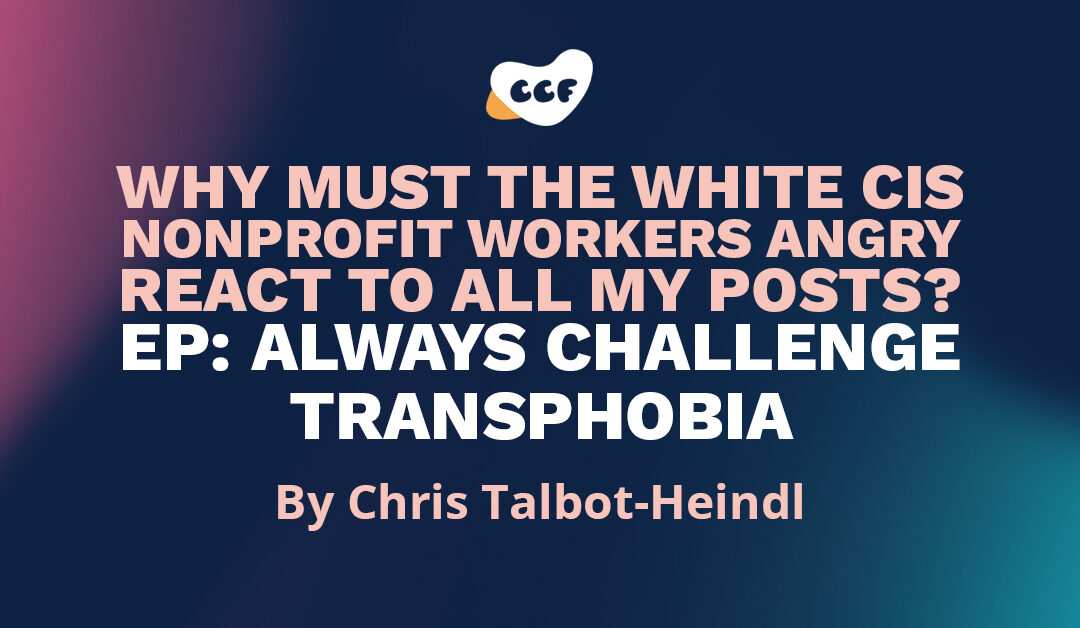 Content warning: this piece is a reaction to the Club Q mass shooting. Please proceed with caution. If you are a member of the LGBTIQA2+ community and need some extra help processing this horrific attack, here is a list of licensed therapists who are either queer-identified or allies who are offering support services, lots of them free.

Try as I might to focus on my day job two days after the mass shooting at Club Q in Colorado Springs, I can’t. I can only think about what I want my cisgender heterosexual friends, family, and coworkers to know about what it’s like to live in my skin. So rather than continue to struggle against that feeling, I’m taking the time I need to make this educomic to talk about what I feel is the root cause of violence like this. And it’s things that we all let slide on a daily basis.

I’m going to start with the time I answered a question from a white cishet fundraiser about a donation they received with a transphobic note attached to it. This was the second donation with a transphobic note they received; the first being returned with an explanation that they were a trans-affirming organization. Other white cishet fundraisers were telling her to just ignore the behavior.

There’s an illustration of a middle-aged cis white man. He says “When I had a transphobic donor, I just ignored them and found that their gifts disappeared on their own.”

There’s an illustration of me looking quizzical with my bottom lip tucked in to my teeth. A thought bubble above my head says “And how many people inside of outside of the organization suffered because of it?”

In the next cell I’m speaking and saying, “Those comments are harmful and I would continue sending the donations back. Ignoring transphobia is accepting transphobia.

In the next cell, a white cis woman is saying, “What is that saying — never mud wrestle with a pig. You just get dirty and the pig loves it. The engagement of refunding is fueling her. Something very important for me in the calling-in process is evaluating the ‘energetic spend’ and if it’s worth it. If you are going to exhaust me and wear me down, then my energy will be better spent elsewhere.”

In the next cell, I’m angry with a thought bubble above my head which says “The problem with this is assuming that the ‘energetic spend’ is the only cost.

Text says “The cost of not saying anything in the face of transphobia (or any other form of bigotry) when you’re from the privileged class is normalizing and operationalizing that bigotry. In a day and age when trans people are being attacked in media, on social media, in the streets, in our safe spaces, and by our own government, the cost of being silent should be too much.”

The label says “Here’s something that happened to me:”

There’s an illustration of me looking at a return donation envelope. In the next cell, I’m holding a hand-written letter included in with the donation, which reads “I am admittedly old-fashioned, but I think ‘they-them’ is ridiculous. What is wrong with he/she or s/he? You are not plural. – Katherine.”

Me: opening a donation. See a note. Transphobic message. “I am admittedly old-fashioned, but I think ‘they-them’ is ridiculous. What is wrong with he/she or s/he? You are not plural.”

Another label says “I explained the incident to my teammates:”

In the next cell, I’m talking saying “I wrote an email back to her explaining that we were a trans-affirming organization and I myself am trans. She immediately wrote back some more transphobic nonsense. At this point, I’d like to return her donation to her.”

In the next cell is an older white cis woman with the label “My Accomplice.” She looks concerned and says “I’m so sorry that happened to you. Of course we should return the donation. Maybe we can have our interim executive director send a message affirming our support for trans individuals and explaining the donation’s return.”

In the next cell, a white cis man scratches his chin and asks “Hold on now. How much was the donation for?” A word bubble says “I don’t think that should matter.” He responds “I think we need to have all the information to make a determination.”

In the next cell, I say “At what threshold would it be okay for someone to discriminate against me and take the time to tuck a hand-written note into a donation because my pronouns existing in my email signature upset her?”

In the next cell, the white cis man says “I’m not saying no, I’m just trying to get more info. Like, what if it was a board member’s parent or grandparent?”

In the next cell, I’m angry and saying, “Then that board member should call in their loved one and explain it to them. I shouldn’t be forced to deal with transphobia at work because they might give a lot of money. What’s the price tag you would put on my dignity?”

Text says “These aren’t isolated incidents. I recently had to hang up on a woman who wanted to lead community science trips but, completely unprompted, launched into an anti-trans diatribe. And after I explained that our trips aren’t gendered and I was trans myself, she began demanding that I answer her truly disgusting personal inquiries. And these aren’t zero-sum interactions. Every time you let transphobia slide because you don’t want to take the energy to counteract it or you want the dollars the transphobic person wants to donate, you are normalizing and operationalizing it at your organization.

It’s so normalized, this was the course of Transgender Awareness Week last week:”

There are a series of seven cells. The first shows the cover of the New York Times on November 14 with an article titled “Pressing Pause on Puberty: Drugs can buy time for trans youth. Is there a cost?” Text says “Monday: misleading and fear-mongering article about puberty blockers on the front page of the NYT”

The third cell shows a screengrab of the Ohio Legislature webpage for House Bill 454 with the short title “Enact the Save Adolescents from Experimentation (SAFE) Act.” Text says “Wednesday: Ohio has a hearing on a Bill that would ban gender-affirming care for minors and force detransition.”

The fourth cell shows a screengrab of a news story with a chyron that says “Threat leads to evacuation at children’s hospital.” Text says, “Wednesday: Boston Children’s Hospital is threatened with a bomb again because right-wing social media account Libs of TikTok claimed they commonly perform gender-affirming surgery on minors”

The fifth cell shows a screengrab of an article with the text “A Reuter’s special report: A gender imbalance emerges among trans teens seeking treatment. Adolescents assigned female at birth account for a significant majority of minors receiving gender-affirming care, including top surgery, fueling debate about the influence of peer groups and social media.” Text says “Friday: misleading and fear-mongering article about trans boys in Reuters”

The sixth cell shows the Club Q logo. Text says “Saturday: in a hate-crime, a shooter opens fire, killing 5 and injuring 18 at Club Q, a club known for drag shows, including all-ages shows. All-ages drag events have become a target for transphobic right-wing groups, which they equate with ‘grooming.” It’s a disgusting (and recycled) attack that has no basis in reality, but has exponentially increased the attacks against trans people and other members of the queer community by association. There’s a clear connection between rhetoric of the homophobic and transphobic right being normalized and presented as one of the two sides of a ‘debate’ and the increase in violence.”

The seventh cell shows a tweet from Libs of TikTok. The tweet has a collage of drag related content. Text says “This organization in Colorado teaches kids how to become drag queens and helps kids ‘safely experience the art of drag on stage.’ Colorado state reps @leslieherod and @BriannaForCO promoted and encouraged this child drag organization and performance.” Text says “Sunday: hours after the shooting, Libs of TikTok creator, Chaya Raichik, posts about another Colorado organization that supports kids who want to learn drag as well as an out lesbian Representative and an out trans Representative, knowing full well that people and locations she blasts have become the target of violence (including Boston Children’s Hospital).”

Text says “When governments are the media are anti-trans, any transphobia you let slide harms us. You need to challenge those sentiments wherever they show up. Because it’s not just individuals. It’s not just Katherine who sent the transphobic note or Jeanne who said transphobic things on the phone call. It’s an entire society that needs to be told differently. So the next time something transphobic happens at your workplace, listen and take the lead from the trans folks in your organization, regardless of the energy cost to you or the dollar amounts of the donations you’ll need to turn away.

I’m happy to say that since these incidents, the team I work with has become more understanding of both the need to challenge transphobia when it shows up and the need for communal healing after a hate crime like the one that happened on Saturday. Instead of having to drag myself to work, I read the words of my accomplice, reminding me that I didn’t have to come in and I could take health and wellness leave to process my feelings.

And so I made this educomic instead.”

Text at the bottom says “All illustrations of people, besides me, are far from the actual appearance of the people involved. Any physical likeness to any actual people you know and work with is purely coincidental.”

Chris Talbot-Heindl (they/them) is a queer, trans nonbinary, triracial artist and nonprofit employee. When they aren’t working the day job, they spend their free time editing art and literature magazines, writing and illustrating educomics to help folks affirm their nonbinary pals, creating a graphic novel to describe what it’s like to be nonbinary in a gender binary world, cuddling their cat, and quad skating in the park. You can find Chris at talbot-heindl.com, on LinkedIn, and Twitter — and tip them on Venmo or PayPal or join as a patron on their Patreon.