All I wanted from him was to see how his words affected me, apologize, and try to do better next time. Instead, he responded defensively …

And when I didn’t answer right away, he told me all about how much he respects and admires me, how he said what he said out of love. He was letting me know that I had misinterpreted what he said, that it wasn’t his intention to make me feel small. What I heard was him telling me I was wrong for feeling harmed.

But after his response, I was mad and, worst of all, disappointed.

It was another instance where the intention didn’t line up with the impact. It could have been a small blip on the radar, instead it blew up the whole screen.

All I wanted from him was to see how his words affected me, apologize, and try to do better next time. Instead, he responded defensively and I learned from the incident that he is not someone I can be honest and vulnerable with right now — that he can’t hold all of me so I need to restrict how much of myself I offer him.

As a white woman, I have been in Bryce’s shoes more often than I’d like to admit. Nearly all of us have some sort of privilege, so we all have been in his shoes (whether we acknowledge as much or not.)

Public intent versus impact conversations have been happening online since 2013 at least and the TL;DR of it is that if the impact of something you said or did doesn’t match with your intention, then you have some reflecting to do. Don’t explain yourself — just apologize and get to work (on yourself).

As a white woman, I have been in Bryce’s shoes more often than I’d like to admit. Nearly all of us have some sort of privilege, so we all have been in his shoes (whether we acknowledge as much or not.)

Certain memories of interactions with my college classmates, work colleagues, and other peers come to mind. I remembered times when my intention didn’t match my impact and the people I’d hurt let me know. They were calling me into a deeper relationship and sometimes I picked up the phone, but mostly I felt misunderstood, heartbroken, and even angry when something I said or did was named as harmful.

And then my burgeoning politicization met my personal healing work. When I brought those two lines in my life together, I was able to metabolize the teachings I’d received on intent and impact and how to respond when my impact was misaligned with my intent. I still feel a lot of those feelings (misunderstood, heartbroken, etc) but I can see them for what they are now (a defense mechanism) and let them go.

In the wake of my decision to politicize my healing, I started responding differently to the harm I caused. This is what I intended to do at first:

Version 1.0 of my cause-harm-and-respond progression:

This was definitely better than how I’d responded in the past. Whether we pick up the phone when we are being called in is up to us. Viktor Frankl famously wrote, “Between stimulus and response lies a space. In that space lie our freedom and power to choose a response. In our response lies our growth and our happiness.”

Picking up the phone or letting it ring is up to us. The calling in is the stimulus, and the response is either nothing or its something, and the future of our movement hinges on that decision. Our responses to being called in give people all the information they need to discern whether a relationship with us is safe, whether we are reliable, trustworthy, whether we are someone they can invest in. Whether we are with them in the building of the new world Arundhati Roy declared is already here, or if they need more time to become an accomplice in world-building.

Recently, I reflected that these steps were not comprehensive enough. It hit me at the beginning of 2020 when I was reading Emergent Strategy in which adriennne maree brown talks about her WOEs. WOE is an acronym that brown credits Drake with, and it stands for Working on Excellence. To me, it seemed like brown was talking about accountability buddies plus (I was tempted to write “with benefits” there as a cheeky way of saying that they are more than just accountability buddies, but we know that brown also wrote a phenomenal text called Pleasure Activism and I didn’t want that to obfuscate my meaning). These WOEs are the people that brown goes to to process, reflect, expand. They offer her accountability and affirmation and see her in the fullness of herself.

I realized that the initial schema was missing time to be seen and heard, to be held and process these moments when my impact didn’t match my intention, which meant that I wasn’t really allowing myself to be changed by the experience. This is what would actually happen:

Instead of going through Version 1.0, this is what I actually did:

Not cute. Also, not constructive if my goal is a new world order in which every body is free (internally attacking myself does not equal liberation, neither does avoiding fellow changemakers FYI).

After reading Emergent Strategy some pieces began to fall into place. I reflected on my most recent conflicts and incidences of harm, my successes and failures around those, and not surprisingly, discovered that the best case scenario always followed after consultation with my WOEs, who I call accountabilibuddies plus. So I revised my guide to include this, and would you believe? Change actually happened!

Here’s what I do now when my intention doesn’t match my impact, when I cause harm, when I fuck up:

Version 2.0 of my cause-harm-and-respond progression:

In The Body Is Not An Apology, Sonya Renee Taylor defines liberation as, “the opportunity for every human, no matter their body, to have unobstructed access to their highest self, for every human to live in radical self-love.” I want liberation for all of us, including Bryce and his many like minded siblings, and I know that to get there, I’ve got to get really intentional about repairing harm at the root by taking accountability for my actions, for choosing to pick up the phone when I’m being called in, and responding intentionally towards the liberation of myself and every human.

In the end, it boils down to this: Don’t be like my old self or Bryce. Practice. Own your shit. Process with your people. Keep showing up. Rinse, wash, repeat.

Listen, we know that avoidance of discomfort and fear of conflict are pillars of this dominant white culture we have, which is based in the myth of white supremacy, so I’m not saying it’s going to be easy, but it doesn’t have to be complicated. We belong to each other, and this practice, of choosing to face our fuck ups with humility, with our accountabilibuddies, for the new world order we’re building for every body’s freedom — this is how we demonstrate that belonging.

As Alexis Pauline Gumbs says, “Freedom is not a secret. It’s a practice.”

In the end, it boils down to this: Don’t be like my old self or Bryce. Practice. Own your shit. Process with your people. Keep showing up. Rinse, wash, repeat. 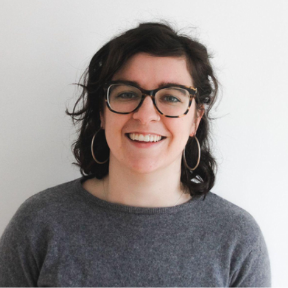 Rebekah Giacomantonio (she/her) was raised on the land of the Wabanaki Confederacy, although she has recently made a home in the ancestral land of the Jumanos also known as Austin, Texas. Rebekah gathers white women who crave healing and creates spaces for us to practice freedom towards an interdependent world where every body is free because we’ve intentionally healed at scale through somatic practice of our values.

Connect with her on LinkedIn to learn more about her work, talk about this article, and read more musings on culture, healing, interdependence and change. If you liked this piece and want to send her a tip, you can send a Venmo or Cash app to @bekahgiaco.