Why we need to get back up when we get knocked down: Lessons from closing a nonprofit I founded

By Philip Deng, founder of Grantable

In that moment, I felt in my gut that it likely meant the end of an organization that I had poured my heart into and knew had so much potential (if only we were given a real chance to succeed).

I don’t have to tell you that our current system of grant funding is broken. Instead, let me share how two grantseeking experiences coming from different sides of inequity led me to where I am today — leading a software startup and building tools that make grantseeking more efficient and equitable for everyone.

In 2017, the nonprofit I founded and was leading had reached a crossroads in its development. We had achieved some success with our early pilot program, gained considerable public interest and support, and brought together a group of public, private, and nonprofit partner organizations who donated six-figures worth of in-kind services and who also were committed to our vision if we found a way to fund the next phase.

What wasn’t looking so great was our bank account, which had less than $10,000 in it. At the time, I was doing what I could to keep us afloat, including waiting tables in the evenings to make a living.

A mission you could taste

We had our sights set on a $250,000 systems change grant, which seemed perfectly suited to our cause and would have finally meant an end to the subsistence budget we’d survived on for three years. For the application, I brought together a team of writers and advisors, including several very experienced executives from other organizations who had strong track records of winning major grant awards. I led the drafting process and incorporated dozens of rounds of feedback from this generous panel of skilled collaborators. The narrative was concise with beautiful storytelling, and the supporting documentation was high quality throughout.

We were seeking funding for the planning phase of an ambitious vision to transform a vacant train station into a public marketplace, to incubate food stall businesses run by immigrant and refugee entrepreneurs from under-resourced backgrounds. We had nonprofit partners who were ready to conduct culturally competent business training and development, a James Beard Award-winning chef as our culinary advisor, for-profit partners to handle real estate, architecture, and construction — and we had community entities that endorsed the alignment of our vision with the broader cultural goals for the neighborhood.

For the site visit associated with this systems change grant, I had to beg a City office to allow me to access the station. This was where I set up a conference space, arranged catering from local immigrant-owned restaurants, and borrowed a screen and projector from a local law firm to show our presentation, which included beautiful professional architectural renderings of the market we envisioned.

When the panel of judges arrived, I greeted them along with the leaders of our partner organizations and representatives of key stakeholder groups. We walked around the historic station on a guided tour led by the architects who had recently completed renovations for the station. The entire group marveled at the potential of the space. Everyone representing our project spoke from the heart and added important context and expertise to the plan. The judges asked good questions and enjoyed an Ethiopian coffee service with pastries. All in, we invested hundreds of hours of collective capacity to be able to immerse the grantmakers in our vision, which they could literally taste.

So when I received the email that we had been rejected — and learned that we were the only group eliminated from the final group of candidates, I was devastated and angry.

In that moment, I felt in my gut that it likely meant the end of an organization that I had poured my heart into and knew had so much potential (if only we were given a real chance to succeed).

I asked for feedback and was galled to hear that our plan to change our local food system was dinged for having too many stakeholders and that the outcomes of our work wouldn’t be fully realized within the one-year funding timeframe of the grant.

I also learned that the decision came down to an impassioned debate among a deadlocked panel of judges — with those who hadn’t attended our site visit on one side and our champions who had tasted the coffee, eaten the cake, and seen our vision, leading the other. The agonizingly close final vote didn’t go our way.

This was only the worst letdown of many. We applied for dozens of grants over our four years, grants that consumed thousands of hours of capacity. And in the end, we won just two awards worth $5,000 each.

Now, because I was ghostwriting for a large white-led organization with millions of dollars of funding, I could propose grand visions with little support and still expect huge checks to roll in.

After closing down my organization, I took a position at a large white-led nonprofit, leading their grants program. There, I encountered an entirely different grantseeking experience.

One instance stands out in my mind: A colleague had mistakenly submitted the wrong proposal to a foundation and, to my utter disbelief, we were still awarded $75,000. We won grants seemingly every week, and in some cases, I knew the programs I was writing grants to propose were not based on any kind of tangible record of success.

In those times, I frequently thought back to my little nonprofit and the farmers market food stand we launched as our pilot program. We fundraised and built that stand ourselves, cooked and served delicious food to thousands of real people, and demonstrated an appetite for more — and yet we were denied even the most modest awards.

Now, because I was ghostwriting for a large white-led organization with millions of dollars of funding, I could propose grand visions with little support and still expect huge checks to roll in.

My personal experience helps me understand how, each year, just 1% of recipients capture half of all grant funding.

I quickly lost passion for the work — because of the experiences described and also because I was tired of the toxic workplace culture that is pervasive in the sector, which has been written about extensively here on CCF.

As a result, I stopped trying to write grants, and I began looking for ways to assemble them instead. I started copying and pasting drafts together from the dozens of proposals I had worked on already. To do this as efficiently as possible, I came up with a hack using Trello, which allowed me to find bits of content I needed in a matter of seconds and eventually meant I could draft proposals for my managers to review usually in less than an hour.

A hack for one, software for all

Inspiration is a funny thing that comes from the places we least expect, and sometimes we don’t even recognize inspiration as inspiration for years.

Last summer, I attempted to move beyond the Trello hack to build software specifically for the purpose of streamlining the grant writing process. Over this last year, the hack became the inspiration behind the core feature in software I’m custom-building — software that will help level the playing field for overworked grantseekers.

I’ve created a prototype of this software, which I’ve used with my grant writing clients. I’ve found that by leveraging a few proposals as source material, my prototype has helped me draft new grants up to seven times faster than by using conventional methods.

This outcome was enough to convince me to take the entrepreneurial leap (again!) to start a company called Grantable.

Grantable recently participated in a nationally recognized startup accelerator called Lighthouse Labs, here in our home base of Richmond, Virginia. In the weeks since graduating from the accelerator program, I’ve put my head down to build and launch the beta version of our product. I’m thrilled and terrified as grant writers from around the country begin to use my software, finding the things they like and, of course, finding the bugs that need to be fixed.

My goal is to release a public version of our software later this year for folks to use. I view this milestone as the first tiny step in using technology to help reimagine the grantmaking system in order to make it more efficient and equitable.

Lessons from failure, direction from fear

Fear of rejection and failure is still ever present on this kind of journey, but I hope I’ve grown enough to be able to listen to what fear has to teach me, to be able to leave behind what isn’t helpful.

On some days, I feel like I’ve come a long way in the years since we were dishing up adobo for farmers market patrons. On other days, the feelings from that time feel fresh, as if I experienced them just yesterday. Inspiration is a funny thing that comes from the places we least expect, and sometimes we don’t even recognize inspiration as inspiration for years.

As a repeat entrepreneur, I find myself in a familiar position — facing long odds, which are further lengthened by my identity as a BIPOC founder. To find my peace and walk in my truth, I appreciate that I’m once again passionate about my work on behalf of a mission I believe is helpful to people in need.

Fear of rejection and failure is still ever present on this kind of journey, but I hope I’ve grown enough to be able to listen to what fear has to teach me, to be able to leave behind what isn’t helpful. I also know that just because I didn’t succeed in the way I had hoped the first time around, it doesn’t mean it was wrong to have tried. After all, that beautiful train station that we tried to bring to life still sits half-empty. 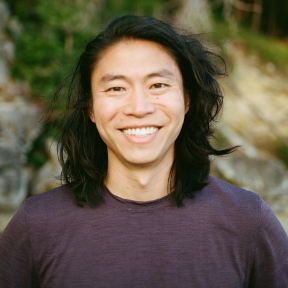 Philip Deng (he/him) is the founder and CEO of Grantable, a software company building tools to make grant funding more equitable and more efficient. Philip has spent most of his 13-year career in the nonprofit sector, much of it abroad, and he continues to be most passionate about issues affecting the wellbeing of people and the planet. He has served as a facilitator and communications consultant for global nonprofit organizations and companies. Philip is an avid backpacker who speaks three languages including Mandarin and Marshallese. One of his favorite jobs was working in a pub in Ireland as a waiter, bartender, and chef, which was an experience that instilled a deep love of food, cooking, and gathering together. Connect with him on LinkedIn.