I was born a poor Black child and, according to my mama, “a picky eater.”

I told my mom that I would no longer eat the devil’s pasta because she had put “onions” in it. She calmly explained that the recipe had always been made this way and the taste was the same. I refused to believe this lying sinner …

I loved sweets though, anything with the right amount of high fructose corn syrup really. I was also highly suspicious of any food that even vaguely resembled a vegetable. If it wasn’t smothered in ranch, why would I eat it? Being born and raised in Cincinnati, Ohio did not help me on the nutrition front either. Home of Major League Baseball (go Reds!), riverboat races, flying pig marathons, racism, one of the lowest-valued NFL teams in the industry, more racism, an incredible public library system, and Skyline Chili, the Queen City truly had it all.

(Skyline Chili is one of the very few ride-or-die Nasty Nati things I will fight you over. You ain’t gotta like it, but you will respect the game or I will diss yo mama and ya grandmama.)

(As a native Ohioan I was given express permission to diss my home state. It’s part of the holographic watermarks on our birth certificates. You, if you are a non-native Ohioan cannot disrespect my beautifully complicated pork chop. It was the first state forged out of the Northwest Territories, meaning it was the first one in which slavery was outlawed by the state’s constitution in 1802. I also worked as a costume interpreter at one of the state’s largest history museums.)

At least it wasn’t Cleveland.

The youngest of a big Midwestern family, I am the daughter of tenacious, industrious, creative, formidable people, primarily from the south by way of Athens, Alabama. That meant most vegetables I encountered were either smothered and covered, canned — or boiled to within an inch of their lives. May they rest in peace. As an adult who moved away to see the wide world and experience how green things are supposed to be prepared and eaten. I have since had my tastes broadened. I mean, why did it take me until my late twenties to realize that minced garlic should go on almost everything you put in a skillet? Since I was a picky eater, I would often balk at new recipes my mother put in front me if they even hinted that veggies were lurking in the mix.

So, imagine the betrayal I felt when I learned that my mother, my mama, meine Mutti would have the audacity to put green bell peppers in her spaghetti recipe!

There were few things I loved more than my mama’s spaghetti. I don’t know why I had never paid attention to how she prepared the dish before, but on the fateful day that I learned the truth? Disgust, devastation, and dare I say — grief — all warred within my chubby little adolescent heart.

After witnessing this crime, I told my mom that I would no longer eat the devil’s pasta because she had put “onions” in it. She calmly explained that the recipe had always been made this way and the taste was the same. I refused to believe this lying sinner and genuinely didn’t eat the spaghetti the next time she made it.

… if I — as someone who has been accused of being intelligent, forward-thinking, smart, and a leader — can acknowledge that my own bias and unfounded skewed reasoning can be overturned when better more accurate information is supplied — then so, too, can you.

Now truth be told? We didn’t exactly have a lot of money when I was growing up. We never wanted for much but my siblings and I all knew what was up. My mama was not a woman to prepare separate meals for the delicate palates of her precious children.

Like every Black mother who ever existed, and every mother who has had to feed five mouths while performing the alchemical magic of making a $1 out of $0.75, my mother’s motto was and still is: “Eat what I fix or don’t eat at all.”

As an adult human that must now fend for myself and bravely chop my own ingredients and meal prep, I understand and respect this principle. Also, my mother has a ninth-degree black belt in ass-whooping and her pimp hand was way strong. So, I was at least smart enough as a kid to keep my mouth shut and learn to chew the spaghetti while breathing through my mouth after I learned the truth about it.

The funny thing is, I never quite lost the sting of this particular cut and so I never ate what I always thought of as “gross onions,” which in reality were green bell peppers.

Now what I am about to tell you is the heart of why you — a nonprofit professional likely engaged in some level of fundraising and concerned about justice and abolishing racist systems — are reading this right now.

Until this year, until last month, having seen 33 winters, worn stirrup pants unironically, lived through two Bush administrations, survived no child left behind — until this year of our lord (all hail Beyoncé) in September 2020, I had not eaten a single green bell pepper because I thought it was a gross, bitter, slightly spicy onion.

But you want to know something funny? Green bell peppers? Are categorically fruits, sweeter than their viridescent skin would have you believe, and culinarily a vegetable. I apparently really like green bell peppers, as it turns out.

The world is a beautiful place and life is here to teach you every day, if you’ll just open your big dumb mind to receive these dazzling lessons.

What’s the moral of our story?

The moral of our story is that I am categorically a smart person who is really dumb sometimes.

The world, culinarily speaking, is a turd sandwich wrapped in a gluten-free dumpster fire being run by a bunch of “really smart people.” They, like me, are the products of a corrupt education system that’s very adept at producing incredibly intelligent idiots.

No one had ever told me, in my whole life, that green peppers, despite being called a “pepper,” are actually sweet, juicy, great sources of vitamin C, and low in sodium. I also never actively sought out this information either. I just let my own prejudice guide my thinking until I reached a point where I was ready to try something new. I truly am brave.

What does any of this mean?

It does not take much effort or skill to understand that at a bare minimum, my life as a Black-bodied human being FUCKING MATTERS.

Well, it means that if I — as someone who has been accused of being intelligent, forward-thinking, smart, and a leader — can acknowledge that my own bias and unfounded skewed reasoning can be overturned when better more accurate information is supplied — then so, too, can you.

Or at least, that’s what it should mean!

Look, building nonprofits (and ideally a country) rooted to a foundation composed of equity, love and justice with liberation as our north star? Not that difficult.

It is challenging to be sure, because revolution and change are complex, but it is not difficult.

And I am not merely playing leftist Scrabble with my wordsmithing. A difficulty, by its definition, is an adjective that means “needing much effort or skill to accomplish, deal with, or understand.”

It does not take much effort or skill to understand that at a bare minimum my life as a Black bodied human being FUCKING MATTERS.

It does not take much effort or skill to understand that power structures erected over centuries of murder, displacement, rape, denigration, and debasement of non-white people will not be toppled or transformed quietly.

There is nothing quiet about change or revolution, but they are simple to comprehend.

Change is constant and no empire is perennial. Especially an empire founded on the stolen land of the massacred, tilled and cultivated under the aching hands and broken backs of stolen souls.

As I am learning from the titans upon whose shoulders I stand, who have given me a view that holds more perspective and sunshine than those that came before me:

I am here to tell you that you, too, can surmount this seemingly great hardship all for the low, low price of putting aside your ego and pride.

Those in power will not yield that which they believe is theirs and theirs alone. They will overcomplicate and muddy the waters so that we all claw each other to death, just hoping for the crumbs that fall from the banquet table that we built for them.

Author and pleasure activist adrienne marie brown elegantly writes in her book “Emergent Strategies” that new ways of being emerge from the interconnectedness of simple systems that compound on one another. This stacking results in the complex web of relationships and systems that make up our societies. Complexity is not difficult to understand, but there is a beauty in the challenges that arise from working with it.

A challenge by its definition is a noun that means “a call to take part in a contest or competition, especially a duel.” It can also mean “an objection or query as to the truth of something, often with an implicit demand for proof.”

This nuance presents us with fluidity and movement and acknowledges that the dismantling of anti-Black systems and institutions cannot be stopped just because the work may sometimes appear incomprehensible.

We must advance forward because it is through this movement work, through query and the proliferation of new complexities that brown says a just society can manifest from this compilation of many “inch wide mile deep relationships.”

In building just institutions, and by extension, a just and loving society that is liberated and centers the most marginalized of us, we must learn to accept that the way we have been operating is stupid — even as smart, capable adults that have survived our own traumas, trials, and tribulations — even as college-educated, award-winning, emotionally motile millennials — we, too, can be dumb and operate from a place of deep ignorance.

I am here to tell you that you, too, can surmount this seemingly great hardship all for the low, low price of putting aside your ego and pride.

And I promise it ain’t that difficult. 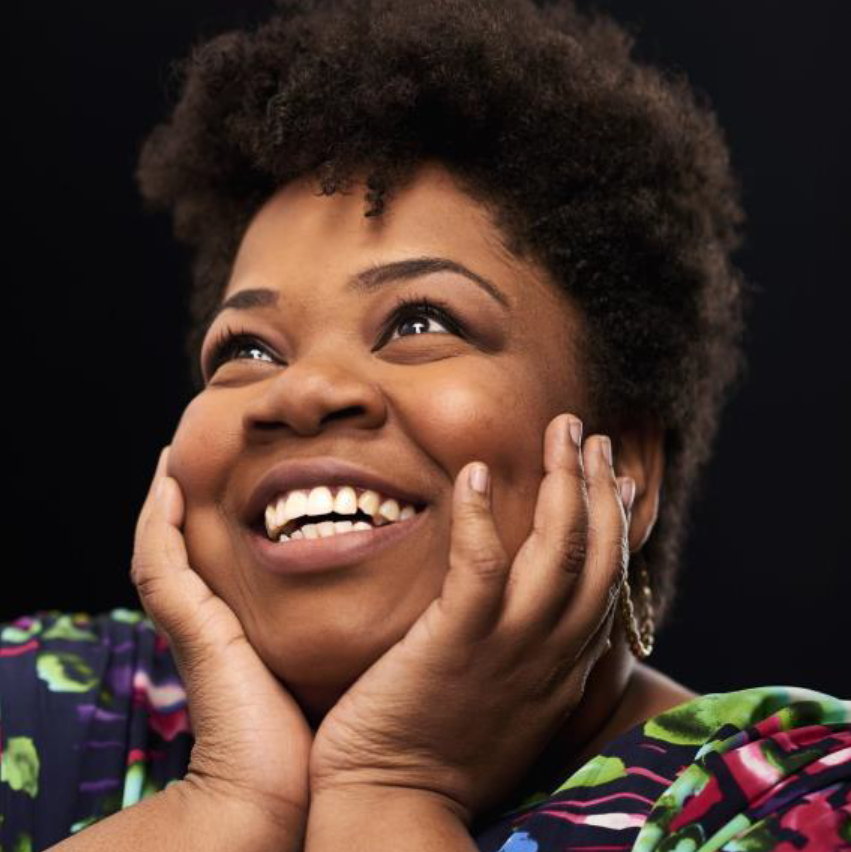 Nina Yarbrough (she/her) has a background in theatre performance, spoken word, and playwriting. She has had a multi-faceted career, which has spanned 14 years both in the arts and the broader nonprofit sector. An Ohio transplant, Nina moved to Seattle in 2014 and obtained her MFA in Arts Leadership from Seattle University two years later. She began her work in fundraising as a member of Seattle Opera’s capital campaign team and currently works for The Central District Forum for Arts & Ideas as the Business Development Manager. A theatre kid at heart, Nina is an avid crafter, owning more books than she’ll ever have time to actually read, and trolls her roommate at least three times a day. This year, she hopes to publish her first collection of poetry, and you can learn more about her artwork by visiting her very cool website, ninayarbrough.com. (Photo cred: Jonathan Vanderweit)