Yes, you too: calling collusions out 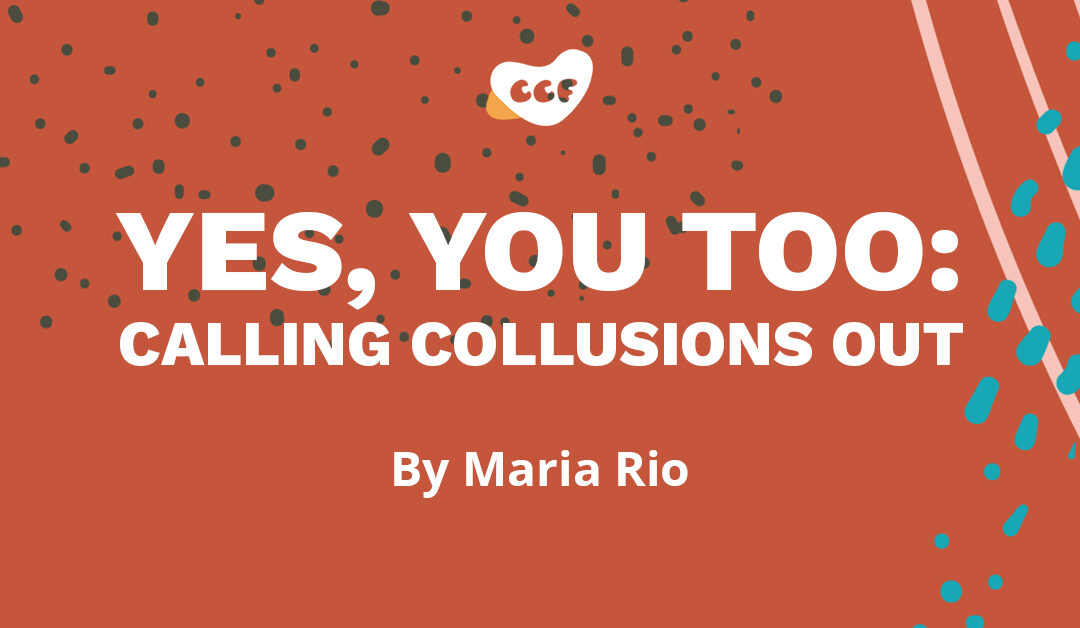 By: Maria Rio, 10+ years of experience in nonprofit project/people management

The deeper I dive into CCF, the more I realize how much we have been harmed by power-hoarding and paternalism: key tools of white supremacy. Secrecy, exclusion, and collusions have hindered and oppressed racialized individuals in our sector. By “collusions,” I mean closed-door, non-transparent decision-making between those with power. These conversations do not include all affected parties. They maintain the status quo and cater to those in power; the results presented to those most harmed as final.

An example of collusion I’d like to share happened earlier in my career. A colleague, let’s call him Jeff, and I had been tasked to run a key Q4 campaign for a face-to-face fundraising agency. As Project Managers, we worked 12 hours a day encouraging our team, creating a fun work culture, and managing goals. This campaign exceeded the goals we had set with the client by 30%. It was a national success and led to the client signing their first full-year contract.

When Q4 ended, our manager decided that the upcoming full-year contract would be run by one Program Manager. We would need to apply for a role that we had already both been doing for months. One of us would end up reporting to the other.

This sounded ridiculous to me: how could Jeff and I go from being equals to not? One of us was going to receive a sizable reward while the other would basically be demoted. Yet, we both had worked the 12-hour days that solidified a massive contract.

While I resisted the idea, he did not, leading us both to interview. In the end, he received the role of managing me and our team. When I confronted Jeff about how betrayed I felt by him and how he had benefited from my detriment, he cried. Jeff was someone I considered a friend, who had hurt me, and who was now seeking comfort.

Reflecting on it now, it’s hard not to notice that Jeff and my manager, along with that person’s managers, are all white. Instead of refusing the proposed plan, Jeff had side conversations with our manager. They were in agreement pre-meeting and presented things to me as if they were final.

I see now that I challenged my manager’s power by arguing against cutting our staff’s metropass benefits or paying for travel time. To my surprise, Jeff was okay with cutting the metropass benefit. He agreed that paying people for required travel should stop. It seemed so out of character, but I later understood it was our manager’s way of coaching him toward the role we both deserved. He landed the role because he did not challenge decision-making that did not impact him personally.

I share this story with you because I know how deeply collusions can hurt, even if you don’t mean them to. By weaponizing exclusion or aligning with those with power for your benefit, you too could be harming a friend.

Let’s explore some of these impacts on a wider scale:

Blindsiding: It has already been decided

Blindsiding results from non-transparent decision-making by those in power. Staff, partners, and community members feel excluded and end up distrusting leadership. This creates a sense of instability due to uneven access to information.

Backroom conversations usually exclude most, if not all, parties harmed by the decisions made. The decisions are then presented as final, without input or consideration for the perspectives of those affected.

How this may look at your organization:

Exclusion, or failing to include all impacted individuals in the decision-making process, creates imbalanced relationships.

Exclusion is an element of collusion that harms the organization and its people. By not inviting people to give input or collaborate, a board or leadership team often fails to address concerns or support staff. Those excluded often bear the consequences of these failures.

Issues occur when those in power don’t understand the perspective of individuals for whom they are making decisions. Exclusion, or failing to include all impacted individuals in the decision-making process, creates imbalanced relationships. It harms the organization’s ability to address concerns, support staff, and work effectively as a team. For example, boards not including staff or service users in strategic planning could lead to important programs being cut or staff feeling devalued or powerless.

By concentrating power in a small group, we often undermine the organization’s mission and values.

Power hoarding is a critical weapon of white supremacy, and nonprofits are not exempt from operationalizing it. CCF was founded on the values that donors should not be at the centre of our work, but that we should centre the community.

Power hoarding is a strong motivator for collusions; those in power stay in power, and those without cater to them. Who has power and who does not is palpable when it is hoarded. Examples include donors expecting nonprofits to create programs aligned with their personal interests, board members leaving their dishes and scraps for staff to clean, or EDs taking every media opportunity.

How this may look at your organization:

Power-hoarders thrive in places where they can actively discourage others from raising concerns. Places without accountability. By concentrating power in a small group, we often undermine the organization’s mission and values. By catering to those in power or maintaining the status quo, the cycle of having performative leadership continues. Passive and non-transformational.

It is disheartening to have personally experienced the negative effects of collusions. Our leaders must act to address how white supremacy harms our sector’s people. Being silent in the face of these issues harms those of us who see this work as aligned to our lived experience. It pushes disillusioned professionals out of the sector.

If invited to collude, please reflect on who is excluded from the conversation, who will be affected, and who will benefit from the decision. Once the harm is done, there is no way to undo it, and it may leave a deep scar.

Consider the power dynamics within your organization. Strive for true collaboration and equity. Remember those who are not at the table may be impacted by decisions you make behind closed doors, without their input. Consider if benefiting at the expense of others, diminishing their contributions and power, making decisions about their lives without their consent, or maintaining the status quo truly aligns with your values.

Maria Rio (she/her) is a fundraising consultant with Further Together with 10+ years of non-profit experience. She is regularly asked to speak on issues related to fundraising and her op-eds have been featured in national publications. She was a finalist for the national 2022 Charity Village Best Individual Fundraiser Award and has a deep passion for non-profit work. Maria also sits on the Board of Living Wage Canada.

You can connect with Maria through Further Together or through LinkedIn.