A Christmas Carol, updated for our times 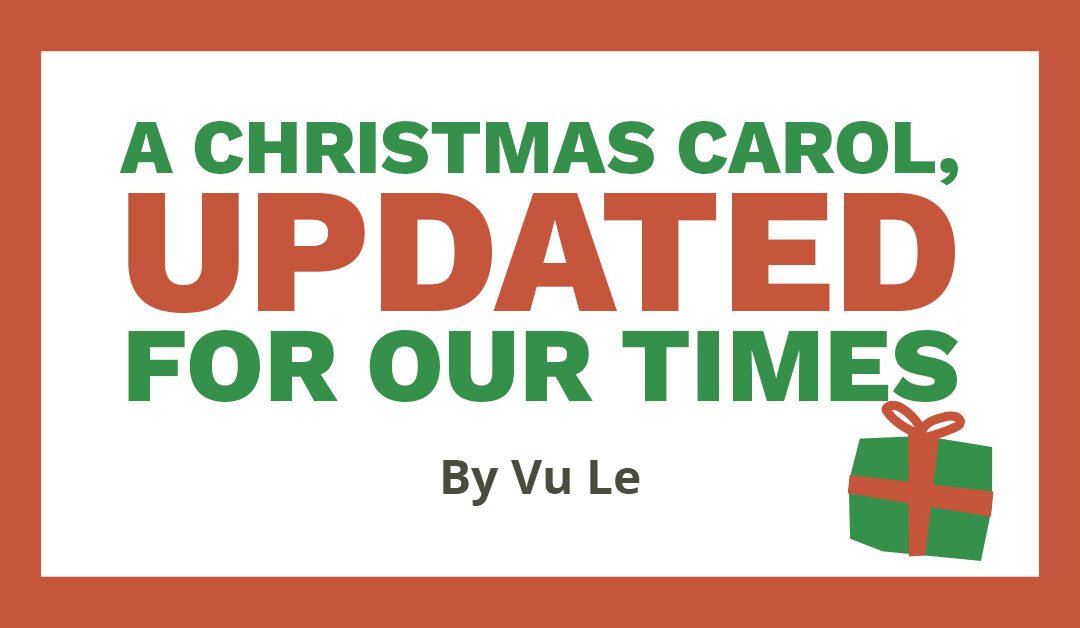 By: Vu Le, founding member of Community-Centric Fundraising and creator of the blog NonprofitAF.com

Charles Dickens’s novella a Christmas Carol is a timeless classic. It was first published in 1843 and has never gone out of print. But 1843 is nearly 180 years ago. It’s time for us to update the story to be more relevant to our times:

The story opens at a large foundation’s headquarters on Christmas Eve. Ebenezer Scrooge is the president of the foundation’s board of trustees. He is a miser who hates spending money, Christmas, and people in general. Bob Cratchit, Scrooge’s executive assistant, is looking at some documents. “Mr. Scrooge,” he says, “it seems we haven’t met our legal minimum for how much money the foundation has to spend each year. What do you say we give some extra money to a few nonprofits in the area? Look at this one. Tiny Dem. It’s a small organization working to end voter suppression, gerrymandering, and corruption in politics. This is the fifth time they applied to us.”

“Tiny Dem? Bah humbug!” grumbles Scrooge, “that is the most ridiculous name for a nonprofit! And their mission doesn’t align with the foundation’s main priority, which is teaching financial literacy to toddlers. If children learn early, they won’t grow up to be impoverished hornswogglers suckling at the udders of society. No, just put enough money into a Donor-Advised Fund to meet the legal minimum.”

That night, Scrooge is visited by a ghost covered in random papers. “Scrooge,” it whispers in a ghostly tremble, “it’s me, Jacob.”

“Jacob…my old friend. How…how are you here? And why are you covered in random papers?”

“Scrooge,” says the ghost of Jacob Marley, “We don’t have much time. Listen to me. I was a terrible philanthropist. I am covered for eternity in grant proposals, logic models, and budget templates as a reminder of the unnecessary burdens I inflicted on nonprofits. Tonight you will be visited by three ghosts. You must listen to them, or you will end up like me! Don’t end up like me! Even though I am a ghost, I still get papercuts!”

At the stroke of midnight, another ghost appears. It looks like a kid. “Are you one of the spirits who are supposed to visit me? But you look like a child!”

“Stop beaming with pride,” says the spirit, “your ancestors stole this land from several Native families. They cut down all the trees, polluted the water and air with toxic chemicals, exploited workers, and lined the pocketbooks of politicians to avoid taxes and regulations. That’s how your family’s wealth was built.”

“I didn’t know,” says Scrooge. The spirit rolls its eyes. “You didn’t care to know. Few of you ever take time to examine where your wealth came from or what evil your family has unleashed on the world. Apparently one of your rich ancestors, bored from not having to work for a living, invented the aspic, which is that weird savory jelly thing that has meat and vegetables covered in gelatinized meat broth set in a mold.”

The spirit takes scrooge to a holiday party attended by well-dressed beings who are pale in the light. “Are these also ghosts?” asks Scrooge.

“No,” the spirit replies, “they’re just white. These are some of the wealthiest individuals in the country. Your contemporaries.”

“I have an announcement,” says a man, “After three years and five million dollars in investment, the white paper for my foundation’s research, titled ‘Change Without Change: Advancing Equity While Preserving Your Assets and Power’ will be out next month! Let’s toast to that!” There is an enthusiastic round of applause.

The spirit whisks Scrooge to another scene. An office in a basement. Rickety old chairs are scattered about. A space heater stands in the middle of the room, but the dozen or so people are bundled up, appearing cold and uncomfortable.

“Why do they look so sad?” asks Scrooge. To which the spirit replies, “This is Tiny Dem. Because you didn’t fund them, they are closing.”

“Well their name is ridiculous,” says Scrooge, “and also, why didn’t they apply to other funders?”

“Their name is a play on small-D democracy,” says the spirit, “and they’ve been applying to everyone. But few funders want to fund civic engagement or political organizing. You all want something heart-tugging and easy to measure, and things that don’t challenge inequitable systems that allow rich white people to be at the top.”

A woman who appears to be the ED clears her throat, “Thanks so much for coming to our holiday party everyone. I’m sorry we can no longer keep our door open. Thank you for all your hard work. Please grab a swag mug and your coupon for a free guacamole add-on at Chipotle on your way out.”

Scrooge finds himself back in his office. The final spirit arrives, a hooded figure holding a scythe. The room suddenly feels warm. Unseasonably warm. “You must be the Ghost of Philanthropy Yet to Come?” The spirit nods. “Why is it so hot?” Scrooge asks. The spirit points to a newspaper. The headline reads, “Global temperature continues to skyrocket. Rising sea level wipes out whole cities.”

“But Spirit! Surely things can’t be that bad!” The Spirit points to another newspaper headline: “Bands of cannibals take over run-down Chipotle joints across the US.”

The spirit turns on the radio. A voice murmurs ruefully. “Another brutal defeat for democracy as the Supreme Court once again upholds gerrymandering and voter suppression. In another stunning but not surprising decision, the Court affirms the right of preschoolers to wield laser death rays at daycare centers.”

“I don’t understand. How could this happen? What are philanthropists doing?”

“Wow, things look bad on earth,” says a man looking at a screen at a news segment on preschoolers wielding laser death rays, “maybe we should release some more of the 13.5Trillion dollars* we have stored up in foundation endowments and Donor-Advised Funds that we were saving for a rainy day.” (*Currently 1.4Trillion)

“No,” says a robot that has a smug human face on its head, “we need to save up for when things get worse. Besides, we’re not just standing here twiddling the mechanical thumbs on the robotic bodies that some of us uploaded our consciousness to after our human bodies died. My foundation just released a request for grant proposals and got lots of applications. So far they are very inspiring. For example, we have a request for 50,000 Bitcoins from a band of cannibals in Las Vegas that wants to turn a run-down Chipotle into a senior center. They actually have a great theory of change.”

“No!” Scrooge screams, “I can’t take it anymore! Spirit, please don’t let this be the future!”

“I hope they move to the next round,” says the robot-human, “I want to visit Las Vegas. I hear the new Pacific Ocean beaches are amazing there.”

Scrooge wakes up on Christmas morning. He is a changed man. He calls up his executive assistant. “Cratchit!” he says excitedly, “I have seen the errors of my ways. We need to do philanthropy differently. No more grant applications! No more making nonprofits wait for months for a decision! No more forcing nonprofits to fit the priorities we determine based on our various fickle whims and interests! Let’s increase our payout rate and start sunsetting! Let’s take a serious look at reparation! Meanwhile, call up Tiny Dem. I want to give them a large 20-year grant to do their work protecting democracy. And also for them to do some rebranding.”

“Sir, even though you’re calling me on Christmas to talk about work, that’s amazing,” says Cratchit, “would you like to come over for dinner? We have a delicious seitan roast.”

“I would love that. I’ll bring some tofu tacos from Chipotle!”

From then until he finally dies and his consciousness is transferred to a robotic body residing on Mars, Scrooge is kind and generous and everybody loves him and he inspires many other funders to do better too. The end.

Vu Le (“voo lay” he/him) writes the blog NonprofitAF.com. He is the former executive director of RVC, a nonprofit in Seattle that promotes social justice by supporting leaders of color, strengthening organizations led by communities of color, and fostering collaboration between diverse communities. Vu is a founding board member of Community-Centric Fundraising. He has degrees in Psychology and Social Work. Vu has two kids, ages nine and six, and watches way too much television when not causing trouble. Find him on FB @NonprofitAF, on IG @nonprofit.af and at @NonprofitAF on Twitter.