Why must the white cis nonprofit workers angry react to all my posts? Ep: White women, stop gatekeeping progress 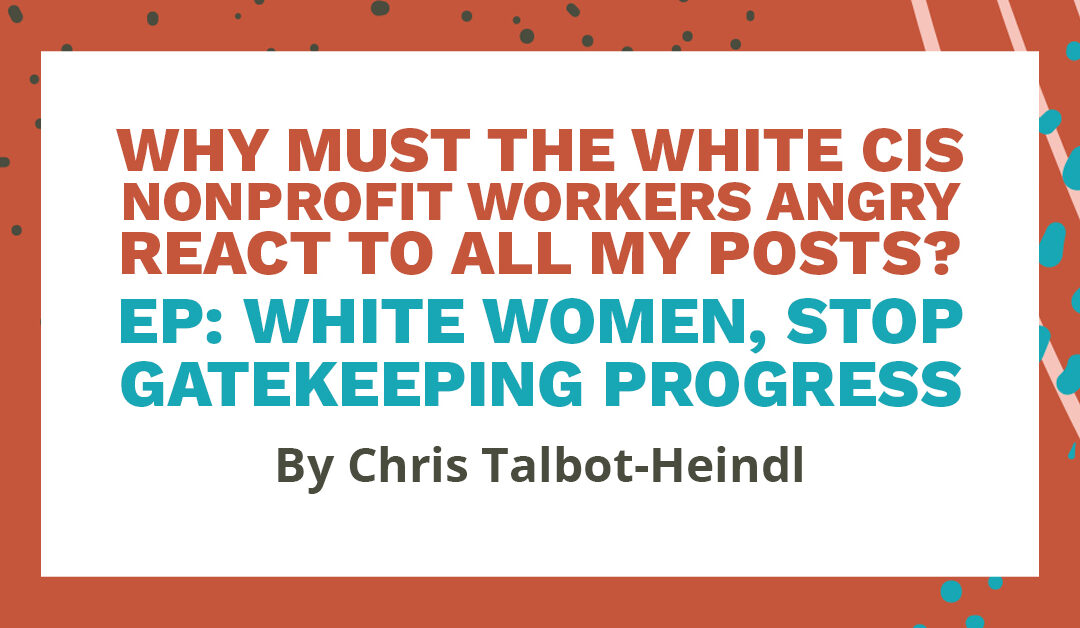 I thought it was just a problem I was experiencing: white women gatekeepers in justice, equity, diversity, and inclusion (JEDI) work. But, I was attending The Adaway Group’s Whiteness at Work Training (I highly recommend this training for folks working at predominantly white institutions!) when Desiree and Jessica began talking about it explicitly. This is a thing! I thought to myself. Not just a problem I’ve had, but a commonplace problem. It looks like this:

The first section shows a portion of a Zoom screen, with one box labeled “white woman boss.” There’s an illustration of a white woman with blonde hair wearing a suit with a green background. She is gesturing with her hands and smiling. She says “That’s definitely an important perspective, and we’ll get to it eventually. But these people aren’t ready for that. They’re not where you are, and we have to meet them where they are.” Next to that Zoom box is a partial box with a yellow background. That Zoom box has the label “Chris (they/them).” There’s an illustration of myself looking perplexed and sucking in my bottom lip. I have a thought bubble that says, “But you never required them to be anywhere, so I don’t have anywhere to meet them!

In the next cell, I’m saying “I hear what you’re saying, but as the Director, can’t you lead this work and require that people get on board? This would be a tiny step in the right direction.

In the next cell, the white woman boss is staring straight to camera and her background is now yellow. She says “You just have to trust me. They aren’t ready for this level yet. And this work isn’t on the forefront of their minds like it is for you. You just have to be patient and go slower. We don’t want to lose anyone over this.

In the following cell, my background is now red and I’m angry. A word bubble says “Well, you don’t seem to have a problem losing me to chronic stress and allostatic load.”

Too many white women in nonprofits are happy to cater to the feelings of other privileged folks rather than use their power within organizations to push for change they recognize needs to happen. This is what it effectively feels like to always be told to “slow down”:

On a red track, there are hurdles set up. They are labeled “racism,” “heteronormativity,” “transphobia,” and “ableism.” Text says “Imagine the cultures of supremacy embedded in your organization are hurdles your marginalized staff have to leap over while doing their work. (Your staff with relative privilege don’t have to leap over these hurdles, but they occasionally stub their toes on them. This is to say that everyone benefits when you remove hurdles/supremacies). Instead of taking down these hurdles with and for your staff, you’ve asked them to slow down on their removal. You’ve now made yourself an impenetrable wall they can’t climb, go around, or through to get this work done.”

In the next cell, there’s a brick wall with the white woman boss’s face superimposed saying “Hey. Slow down.” Text says “The hurdles are always there, but when you tell your marginalized staff and their accomplices to temper their responses to it and slow down their progress to dismantle or mitigate it, you now become a barrier to their success. It’s not a “slow down,” it’s a ‘stop until I decide we’re ready.”

Text says “What it should look like.” There’s an illustration of a split Zoom screen. On the left, there’s an illustration of me against a yellow background. I’m saying “This has become a problem that I think we can solve if we x, y, and z.” On the left, the white woman boss is shown with a green background. She says “Thank you for bringing this to my attention. I’m not familiar with the issue you brought up, but I trust your insight. Let me know how I can help and what resources you need.”

Text says “Some folks may not come with you. And that’s okay. The two folks who I portrayed in the first episode didn’t come with me, but we can ensure the folks we bring on to replace them have an interest in and want to bring JEDI principles to the work. But allowing these conversations and changes is the only way to even hope to make conversations about equity go from this:”

Text says “To this:”

In the next cell is an illustration of nine people in a Zoom call. I am in the upper left after just speaking. Across the screen are people with green backgrounds and their faces replaced with the “curious” LinkedIn emoji.

Text at the bottom says “All illustrations of people, besides me, are far from the actual appearance of the people involved. Any physical likeness to any actual people you know and work with is

Chris Talbot-Heindl (they/them) is a queer, trans nonbinary, triracial artist and nonprofit employee. When they aren’t working the day job, they spend their free time editing art and literature magazines, writing and illustrating educomics to help folks affirm their nonbinary pals, creating a graphic novel to describe what it’s like to be nonbinary in a gender binary world, cuddling their cat, and quad skating in the park. You can find Chris at talbot-heindl.com, on LinkedIn, and Twitter — and tip them on Venmo or PayPal or join as a patron on their Patreon.