For professionals of color, bringing our whole selves to work shouldn’t mean reliving trauma for the benefit of white colleagues 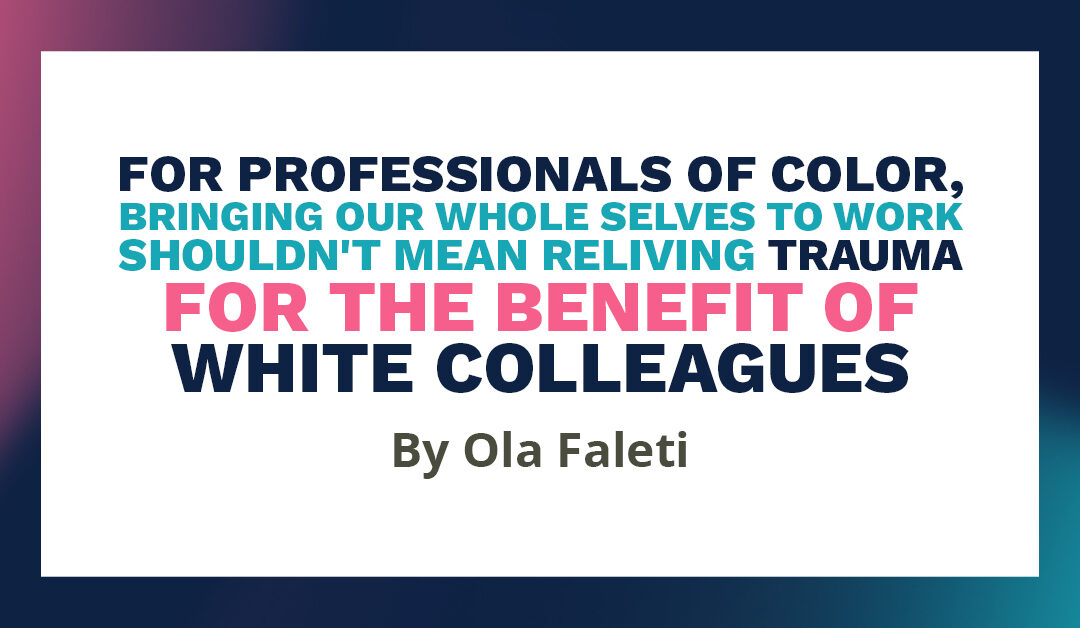 The notion of bringing “your whole self” to work has gained workplace momentum for the past few years, especially in nonprofit spaces. Nonprofits are notoriously bad at enforcing work-life balance. Many of us who come to this work do so from a place of mission alignment, which organizations can exploit all too well.

For organizations that approach fundraising with a race-, equity-, and social justice-based lens, it makes some sense to lead with bringing your full self to work. It gets us thinking about the ways our identities affect how we see money, how we value money, and how we feel about asking for it, right?

The thing is, some of us already think about these identities often. We’re slapped in the face with them.

As a daughter of West African working-class immigrants, the question of “how did I end up here” was one that, more often than not, I had to contend with as a new professional in nonprofit spaces.

Does a “brave” space have to cause harm?

I didn’t feel like I was better equipped to fundraise, but I felt raw and exposed in a way that I imagine other participants didn’t.

A few years ago, I participated in a training led by a grassroots fund. I was excited to be in a rare space that openly recognized the shortfalls of philanthropy and fundraising, and made a point to counter the white supremacy of traditional funding models. Throughout that weekend, we were told that our space wasn’t a safe space, but rather a brave space. We would be expected to step outside of our comfort zones to dig into how our identities and personal experiences impact how we ask people for money.

On the first day of this weekend-long workshop, we focused on how race impacts money and people’s access to it. There was plenty of useful information to reinforce, but ultimately nothing I didn’t know before. The next day had a class focus, and we were each expected to come having done some research as to how our families received the socioeconomic privileges that we had.

I came ready to talk about how my parents benefitted from the Reagan administration’s Immigration Reform and Control Act of 1986. Several cohort members after me — many of them, white — spoke of trust funds to be inherited, houses that were bought thanks to the GI Bill, and other means of securing generational wealth. This activity lasted for over half an hour, and I felt my resentment growing as I heard person after person talk about how their family’s financial wealth was born. What is the point of this? I wondered. To remind me, again, that I occupy spaces where my peers have more privilege?

Following this activity, we jumped directly into another one. As various statements were read aloud, we moved to sides of the room based on our answers for each question. Questions were about things like food stamps, free and reduced lunches, and whether or not we grew up in a house our parents owned. Once the activity ended, we were directed by the facilitators to form groups based on how we answered certain questions. They informed us that the groups we were in represented our childhood socioeconomic class, and that we could divide ourselves further within each group, placing ourselves in order from least financially privileged to most.

I looked at my fellow participants and looked around the room. Our group of four working class, low-income kids was the minority. I made eye contact with one of my group mates and we immediately started crying.

I was brought back to deep-seated feelings of inadequacy, of being in spaces where I felt invisible because everyone assumed that I grew up with certain benefits. I also hate crying in public, especially around people I don’t know very well.

I left that training in a funk that didn’t subside for another three or four days. I didn’t feel like I was better equipped to fundraise, but I felt raw and exposed in a way that I imagine other participants didn’t.

You can bring your “full self” while protecting your peace

Over time, you learn what parts of yourself to bring forward and what parts to protect. I don’t see it as code-switching. I see it as self-preservation.

We bring our full selves wherever we go. There’s no way not to. It’s a matter of what we choose to compartmentalize in the moment.

I’ve navigated a lot of spaces that have implicitly or explicitly not been for me. Over time, you learn what parts of yourself to bring forward and what parts to protect. I don’t see it as code-switching. I see it as self-preservation.

I think of the day I found out about the verdict for Laquan McDonald’s killer a few years ago. Laquan McDonald was a Black teenager murdered by police; they shot him 16 times while he was walking away. The day that Jason Van Dyke’s verdict was read also happened to be a day that I was the only person of color — never mind Black person — in our office. The news broke as I was finishing up a grant proposal, and I was deliberate about not reading the verdict right then and there at my desk. I had tasks to get done. And as much as I appreciated my white coworkers, I didn’t feel like being sad about the devaluing of Black life in a setting where no one else could understand how I felt. I saved my raw feelings for the end of the workday, when I could go home, take a hot shower, and care for myself.

I’ve since met with the facilitators of that ill-fated race and class training, and to their credit, I received an apology. I’ve also heard that they’ve revamped the training entirely, no doubt after others with similar experiences let them know how harmful it was. Just because we bring our full selves to work, doesn’t mean everyone needs to see it. I sometimes question the benefit of personal stories, especially in mixed DEI settings. Usually the group learns at the expense of select people retelling and reliving the ways that systemic oppression makes their lives harder.

Instead, let’s reflect on our biases. What are the dominant identity norms in spaces, and who is being left out? We don’t celebrate the ways in which marginalization breeds invention. It breeds creativity. It breeds social agility and flexibility. How can we lean into that further?

Ola Faleti (she/her) is a Chicago-based creative and nonprofit professional. Her creative practice informs her professional life, as Ola’s work centers arts education equity. When not working, Ola is reading submissions as the nonfiction editor for Vagabond City Lit or working on her own poetry collection. Her favorite number is 9 and she believes there’s no such thing as too many flowers. She blogs, sometimes and posts occasionally on Instagram @sweetest.teeth. If you feel so inclined, tip Ola on Venmo @Olawunmi-Faleti.