Why must the white cis nonprofit workers angry react to all my posts? Ep: “That’s just the way it is” 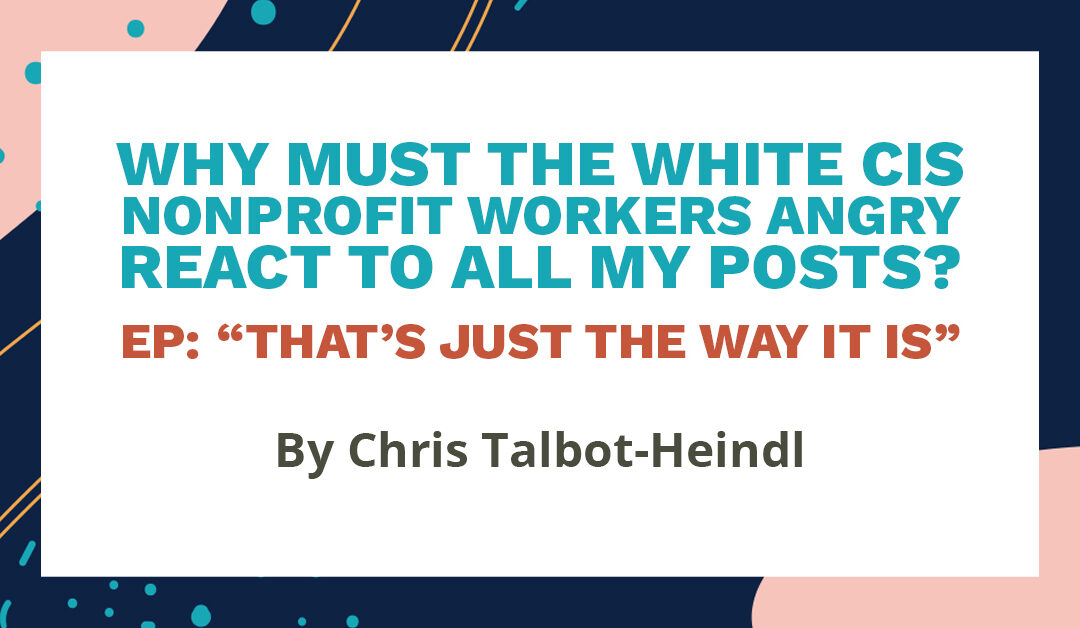 Apologies if you’ve heard this one before: imagine me — a queer, trans, triracial person — in a Zoom meeting with an all-white, all-cis Development Committee. A proposal for a pay-to-play fundraising scheme (a fundraiser that requires donors to pay to engage in an activity, in this case: an educational event) is on the table and I mention the equity issues of who can access this and how it doesn’t advance the mission…

The first section shows a portion of a Zoom meeting screen, with one Zoom box, labeled “Chris (they/them).” There’s an illustration of myself in the box against a green background. I’m saying “That’s not an equitable practice and would lead to only our wealthy donors getting information that should be readily shared with anyone who wants to learn it. Some of the people who collected the data that informed our research wouldn’t be included in that group.” Next to that Zoom box is a partial, showing a white woman. The name label says “white cis woman” and her Zoom box is yellow.

In the next cell, I’m saying “The history of wealth in this nation and who has had access would also cause a racial disparity because — ” I’m cut off by the white cis woman laughing in the next cell. In the next, I’ve closed my mouth tightly and tilted my head and my Zoom box is now yellow.

In the next cell, the white cis woman is smiling with her hands up in a dismissive gesture saying “That’s just how fundraising is. That’s how it works.” Text says “Without thinking, I responded.” In the next cell my Zoom box is now red, I’m angry and saying “Well, it’s a practice steeped in white supremacy culture.”

In another meeting, I brought up the equity concerns I (and the rest of the staff) had with allowing negotiations of salary. Something we had talked about thoroughly as a staff and all agreed brought in too many inequities…

The second section shows a portion of a Zoom meeting screen, with one Zoom box, labeled “Chris (they/them).” There’s an illustration of myself in the box against a green background. I’m saying “As a staff, we’ve decided not to invite negotiation. Studies show that candidates with relative privilege are aware of and will negotiate, whereas candidates from marginalized communities are less likely to even know negotiation is a thing. I didn’t know until I was about 35. Additionally, pay equity is something we can operationalize right away.” Next to that Zoom box is a partial, showing a white man. The name label says “white cis man” and his Zoom box is yellow.

In the next cell, the white cis man is still against a red background. He is saying “At the end of the day, we’re a business. And this is how business is.” Text says “I didn’t see the point in responding, so I turned my camera off and stop giving my wisdom. If my expertise wasn’t valued, they could stare at my Zoom icon and feel my absence.” In the next cell, my Zoom box is black with my Zoom icon, which is a portrait of myself.

What does it even mean that something is “Just the way it is?”

Text says “Fundraising techniques or business practices aren’t like corn. They aren’t what nature gives when we plant certain seeds. They have been developed over the course of decades to be what they are. And, as with everything else in our society, they are often steeped in white supremacy culture.

“The good news is that because they aren’t natural or immutable, we can notice that something is inequitable, talk about it, and change it to something that is as accessible to everyone as we can imagine. And, when we learn that it is still inaccessible to some, we can change it again.

“But first, we need to stop reacting angrily when someone points out inequities in the way it’s been done historically and realize that just because we’ve always done it that way doesn’t mean we have to or that a better path isn’t possible.”

The next cell shows the full Zoom room. Everyone is either labeled “white cis woman” or “white cis man” against a green background. In the Zoom room, I say “That’s not an equitable practice.” The white cis woman from before, instead of laughing, says “I didn’t realize that. Can you say more?” Everyone else on the Zoom call has the LinkedIn curious react emoji replacing their faces.

Chris Talbot-Heindl (they/them) is a queer, trans nonbinary, triracial artist and nonprofit employee. When they aren’t working the day job, they spend their free time editing an art and literature magazine, writing and illustrating educomics to help folx affirm their nonbinary pals, creating a graphic novel to describe what it’s like to be nonbinary in a gender binary world, cuddling their cat, and quad skating in the park. You can find Chris at talbot-heindl.com, on LinkedIn, and Twitter — and tip them on Vemno @Chris-Talbot-Heindl.