America’s charitable problem extends far beyond Giving Tuesday, and the Global South is bearing the consequences

By Geetanjali Misra, co-founder and executive director of CREA

“Change a child’s life for the price of a cup of coffee.”

“What will your selfless acts be this holiday season?”

“TODAY is our LAST CHANCE to SAVE LIVES.”

Do these sound familiar?

The Tuesday after Thanksgiving has become a charity free-for-all, with pleading subject lines vying for attention as they flood mailboxes. Nonprofit organizations have seized onto Giving Tuesday as an opportunity to reap a kind of fiscal penance after the indulgences of Black Friday and Cyber Monday.

After spending one day feasting and feeling thankful for all we have, and spending the next days consuming even more, it is difficult to turn away from societal injustices like homelessness and hunger.

This worldwide annual drive to solicit individual philanthropists to give what they can works astoundingly well. Giving Tuesday is the largest day of the year for direct donations. An estimated $2.47 billion was donated to U.S.-based charities by over 34 million people in 2020 during the one day campaign. The value of this funding goes far beyond the stunning numerical total at the bottom of a budget line, because this is money without strings attached.

While the global community has started to rally around the call that development solutions need to come from the Global South, the funding to make that a reality has not materialized. Instead, Global South organizations are often seen as essential but rudimentary. When funding does arrive, these local nonprofits are usually expected to do more with less because of their lower costs of operating.

And for nonprofit organizations based in the Global South, this is a luxury that they rarely get from the international community.

Fundraising in the Global South (countries that have been marginalized within political and economic systems, post-colonization, by Global North countries) requires resources that are often out of reach. The old adage “it takes money to make money” is true even in the world of nonprofit organizing, where our literal distance from funders becomes a disadvantage.

While the global community has started to rally around the call that development solutions need to come from the Global South, the funding to make that a reality has not materialized. Instead, Global South organizations are often seen as essential but rudimentary. When funding does arrive, these local nonprofits are usually expected to do more with less because of their lower costs of operating.

However, while these organizations may be locally-based, their work can span from community level to regional — and global scale and requires significant financial resources. While funding support from generous donors can facilitate program growth, many of these grants are project funding. Support to specific projects, be they girl’s empowerment programs or reproductive health service strengthening, don’t provide support for organizational development in terms of institutional strengthening and further fortifying internal capacity to deepen work.

This keeps Global South nonprofits dependent on the Global North for funds that offer temporary relief rather than sustainable change.

Nonprofits without offices in the U.S. or Europe often do have lower overheads and higher cost effectiveness, but they also spend a great deal of resources proving that to potential funders. Rarely trusted with core funding to use at their own strategic discretion or self-identified priorities, organizations in the Global South are forced to fundraise for small projects rather than long term missions or sustainability.

There is an obvious need for systemic shifts in how we fund work in the Global South at the institutional level, but there is much that can be done at the private and individual giving levels as well.

Most often, funding only trickles down to the Global South via larger Global North-based institutions and foundations, which syphon off much of the budget along the way. In their most recent report on private philanthropy, the OECD estimates that 97% of U.S.-foundation giving in 2013-15 was funneled through intermediary and non-governmental organizations such as WHO and UNICEF.

A report by the Vodafone Foundation and ClearView Research on ‘Barriers to African Civil Society’ found that while U.S. foundation funding to Africa jumped more than 400% from $288.8 million in 2002 to nearly $1.5 billion in 2012, most of this funding, went to organizations headquartered outside Africa — making it harder for informal and smaller organizations to secure resources needed to sustain their work.

In our own underfunded nonprofit sector, data from 2016/17 showed that only 1% of gender equality funding went to women’s organizations, and the vast majority of this went to international organizations based in the donor countries.

American foundations may fund progressive causes but their grantmaking processes create bureaucratic barriers to small local organizations who are located closest to the challenges they try to solve.

A recent study that assessed the grantmaking practices of 148 largest private and community-based U.S. foundations found that only around 10% allowed grantees or community members most influenced by the funding to decide how the funds should be allocated. Again, that means that few nonprofits were trusted to choose how to spend their funds.

There is an obvious need for systemic shifts in how we fund work in the Global South at the institutional level, but there is much that can be done at the private and individual giving levels as well. Many of the U.S.-based organizations participating in Giving Tuesday this year will be putting out calls to fund their work countries around the globe. And you should continue to give because these direct fundraising efforts fuel important efforts. 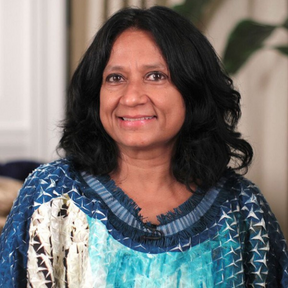 Geetanjali Misra (she/her) is the co-founder and executive director of CREA, a feminist human rights organization that is based in New Delhi and led by Southern feminists. She has over three decades of experience working at the activist, grant-making, and policy levels on issues of sexuality, reproductive health, gender, human rights, and gender-based violence. She holds Master’s degrees in International Affairs from Columbia University and in Economics from Syracuse University. She writes on issues of sexuality, gender, and rights, and has co-edited ‘Sexuality, Gender, and Rights: Exploring Theory and Practice in South and Southeast Asia’ from SAGE. She is also the author of ‘The Power of Movements’ published by AWID.