Beyond boring, you know what a 50-page unreadable report also is? Yep, inaccessible.

As a communications and branding person that works with a lot of nonprofit clients, I can’t tell you how many times I’ve written something really pithy and scarily simplistic for a client, only for them to resist and start trying to sneak back in paragraphs upon paragraphs of really specific information about this or that.

I totally get the human desire to be comprehensive, accurate, thorough, and historically factual.

Beyond boring, you know what a 50-page unreadable report also is? Yep, inaccessible.

I think we’re all a bit prone to thinking that accessibility is tied to technology — like a website’s coding, the structure of a PDF, metadata, whatever — and so we think that accessibility is an ‘expert’s domain,’ like we kinda assume it’s the web developer or graphic designer’s job. But actually, accessibility comes in really varied forms, including how we write. And this is cool because just about everyone writes and reads, which means everyone can play a part in creating more accessible content.

I think the U.S. education system and also our professional workplaces pressures us into communicating a certain way to sound important, authoritative, and leader-y. Like, do y’all remember teachers telling you to stop saying “like” all the time because it doesn’t sound polished or whatever?

As a result of that kind of repeated training, so many of us get into this weird academic mode whenever it’s time to write. Like, we’ll totally speak like a normal person in meetings or when we’re telling our colleagues about what we did over the weekend, but when it’s time to put it down on paper, suddenly it’s all like, “On Friday, the 26th of October, I envisioned a lovely breakfast for myself that was simultaneously physically nourishing and emotionally fulfilling.”

The thing is wordiness, jargon, or other types of ‘in-crowd’ language nearly always excludes. It creates a bar that people have to clear in order to be ‘qualified’ to understand something. It also makes it hard for people who have reading, memory, attention deficit, or other cognitive issues to understand what is being communicated.

It’s better to keep sentences efficient, logical, and straightforward. An easy way to do this (but it’s not the only way) is to just keep your sentences short and simple.

2. Stack high-value information at the top.

Unless the topic you’re writing about is inherently super interesting (like aliens) or you’re a really good storyteller (no pressure), it’s generally a good idea to get to the point or the mission of your writing right away. There’s not much point in teasing it out because we rarely have perfect audience members.

Most of the time, our readers are quickly scrolling through their phone and skimming stuff on their lunch breaks. Our readers are us! We’re super busy people with a lot of life things pulling at our attention and a lot of the writing and reading that we do is information-sharing rather than epic-artistic things.

So that’s why it’s good to just immediately lay out what we’re gonna be talking about and why we’re gonna talk about it. Skim-readers often read just the first few lines of content, and if they don’t get the info they need quickly, they might just move on to the next tab open in their browser.

3. Subheadings and paragraph breaks are your friends, so use them.

Look, I know the bleak hopelessness that a person can feel inside when they open up a URL or a PDF and see just blobs and blobs of loooong paragraphs. That’s why nearly every Community-Centric Fundraising (CCF) hub essay has subheadings and itty bitty paragraphs.

A lot of the time, people vet a piece of content before they commit. That is, they will grab an overall impression of content before they make the decision to pause, go back to the beginning, and do a deep reading. Breaking big paragraphs up into smaller chunks is cool because it’s easier for the eyes to scan over text. Also! Because so much of us do our reading on mobile devices these days, the smaller paragraphs read more comfortably on small screens.

I love subheadings. They are great for organizing and structuring long-form content (like CCF essays, which tend to be beautiful 2,000-word monsters!), which helps out writers as well as readers, and they are also handy for those using screen readers. Subheadings can serve as chapter markers or a roadmap for screen readers, allowing people to freely jump from section to section rather than be trapped in a nightmare forest of unending paragraphs.

4. Try to baby-bear bullet points — not too much, not too little — go for just right.

Bullets are generally awesome because they are visually pleasing to look at. (Think about what you’d rather see: Your grocery list written as a paragraph, or your grocery list stacked in bullet points. That’s what I thought.) Plus, screen readers will tell users how many items are on a list if the list is correctly bulleted. So, in that case, rather than having the screen reader read all 20 items of a grocery list, the human reader can just NOPE OUT of that situation because they get the gist. In contrast, when you write 20 items repetitively in a paragraph, screen readers will read every single boring item.

We can overuse bullets though — like when lists get way too long or when bullets get sub-bulleted a whole bunch of times and stuff starts sloping down the page and making that triangular block of text — that’s going too far.

5. When it comes to words, avoid relying on visual emphasis.

I know it’s tempting to get artistic and use bold, italics, the CAPS LOCK key, and strike-throughs all at once — but don’t do it. When it comes to screen readers — they don’t read ALL CAPS consistently and sometimes they think words are acronyms when they’re not (and vice versa). The screen reader also doesn’t see all the words you are bolding and italicizing or striking through.

That’s why it’s generally best to convey the big emotions in the content of the writing itself, or contextually. Like this:

“So I screamed at him and said, ‘You don’t even know what you’re talking about!’”

It’s also cool to use italics as emphasis sometimes, but just don’t depend on it to carry meaning. Think of it as a nice-to-have, rather than a must-have. Like this:

“Are you for real, right now?”

My last word on this is that bolding and italicizing stuff should be used sparingly. No one truly wants to see an entire paragraph in italics. No one!

6. Be structurally consistent to help people continually find their footing in your writing.

In longer pieces of content or a content series (like social media posts), it’s super helpful to readers if content is consistent and matchy-matchy. Sometimes clients fight me on this and are like, “But Stacy, don’t people want something new and original each time?”

Because that means they have to re-learn how to read or absorb your information each time, and people don’t want to be mentally working that hard all the time. So like, if your content series ends with a food-for-thought question each time — include that for the entire series.

In the context of a single piece of content, this often means keeping sections of the content consistent and predictable. Like if your first subheadings is a full sentence, make them all full sentences. If you have a bunch of subsections in your content and write the first one like a call-and-response, it would be real nice if the rest of the subsections are also call-and-responses. Get formulaic with it.

7. Put yourself in your very smart but under-informed reader’s shoes constantly.

It’s super important to create content that can stand alone, content that doesn’t require reading footnotes or clicking on links to understand and comprehend — content that deeply considers the reading experience. This means anticipating moments in the text that might be a little inaccessible to your readers and proactively giving them information that they need to understand just enough to get your point.

“The nonprofit industrial complex is a trillion-dollar industry.”

I know most of us reading this essay get the implication of that, which is nice. But some of our readers are also not that familiar with CCF or its principles. Some readers seriously just Googled something random and accidentally ended up here and are like, “Whoa! That industry makes a lot of money! Should I get a job there?”

Anticipate those bits of confusion or misunderstanding and tend to them. We actually don’t even have to spill a lot of words to do it. Like, we can just adjust it to this:

“The harmful nonprofit industrial complex is a trillion-dollar industry.” 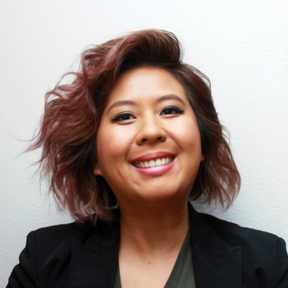 Stacy Nguyen (she/her) is a Vietnamese American visual designer/artist and branding consultant. She works out of the Seattle-area, often with BIPOC-led nonprofits there. Her work mostly involves creating visual brand identities and storytelling. She loves all of her clients but is never above subtweeting about them. Earlier in her career, she was a journalist and news editor, which was where she learned she loves helping writers feel more okay about expressing themselves more authentically. She oversees Community-Centric Fundraising’s external communications and the Hub content with her super awesome team members. Connect with Stacy on Instagram.