Anyone who knows me, knows I love a good African proverb. I grew up hearing these sayings as commentary on my actions —  the not-so-silent judgements on the quality of my chores, the are-you-sure-about-that questions about my decisions, the life lessons waiting to be discovered from a respected elder waiting to impart them on me. Proverbs are built into our stories and were how my elders communicated messages to my sisters and me, how we were implicitly told to do certain things. Proverbs were essentially a coded game. And we happily accepted the challenge and grew all the better for it.

In philanthropy, we have all heard and have possibly even used the African proverb: “It takes a village to raise a child.”

Yes, this quote has also been attributed to Cory Booker, Warren Buffet, Hillary Clinton, Al Gore, and many others to bolster their speeches, declarations, and social media posts. The only ‘collective’ piece in this, is that they’ve ‘collectively’ decided that homogenizing African proverbs is good for business. Still, it doesn’t take away from the fact that proverbs originated in African cultures, covering themes of unity, collective action, networks, and cooperation. Our proverbs convey history, insight, revelations, ideas and learnings, and most importantly, they center community and partnership.

The “go together” proverb I referenced supports a growing concept in fundraising — that collaboration and working together is far more sustainable than going at it alone.

From proverbs to practice

As a result, ideologies centering the spirit of togetherness took form, having been built up from proverbs and put into practice for the future sovereignty of African nations. This allowed for an outlet of African communal practices such as the Mbongi (which translates to house without rooms) out of the Congo region, Ujamaa (also the fourth principle of Kwanzaa around cooperative economics) which formed the basis of Nyerere’s development policies in Tanzania after its independence, and Ubuntu of Southern Africa, where the term is used to convey a belief in the universal bond of humanity. I would also argue that Shir assemblage of Somalia, Gaçaça courts of Rwanda, and Judiyais of Southern Sudan are all central tenets of communal reconciliation and healing.

These are only a few examples of many that depict the history, harmony and power of collaborative ideologies and collective action in African societies.

The colonization of collaborative philanthropy

In fact, [collaborative philanthropy] has been co-opted to fit within an institutional setting, and seems to embody a different motivation, one which ignores key players.

I first heard the term “collaborative philanthropy” linked to a large institutional foundation in early 2019, but this phrase (also known as impact philanthropy) has seen a lot of traction in recent years. Despite its growing popularity in our lexicon, it doesn’t give credit to communities who have been practicing it, nor does it acknowledge the history of fundraising that promotes community care.

In fact, it has been co-opted to fit within an institutional setting, and seems to embody a different motivation, one which ignores key players.

These days it refers to funders and high net worth donors working together with nonprofits towards a social cause. The framework of impact philanthropy doesn’t center constituents or take into account community fundraising practices. Instead, it reinforces the power dynamic of those with wealth over the most significant of collaborators — the people they serve.

Given the investor-type relationship of impact philanthropy and considering that money is coming from the private sector and lucrative industries, it can come off feeling transactional rather than transformational. The true sense of collaborative philanthropy should counter the harms of capitalism and colonialism — it should counter the idea that funders are the ones that create and cultivate strategies for social change.

I believe that we, as constituents and community leaders, must reclaim the term and the ideology. Reclamation will help ensure that nonprofits can receive significant resources to successfully and sustainably overcome systemic barriers to transform and lift up communities of color.

Philanthropy is full of complexities that have contributed to a long history of exclusivity and patronization. Let us demand true collaboration, allowing for a democratic process where all stakeholders, including constituents, can be seen, heard, and honored.

Recently, I wrote a piece for Candid titled, “Fundraising will only be inclusive when we acknowledge the legacy of giving in communities of color.” In it, I observed how identity-based giving has, for generations, been an effective way for belief-aligned groups to get together and actively create change to address root causes of systemic issues in their communities. I cited examples of Tanda lending circles led by Latinx community members, of Susus in West African immigrant communities, and Ukub from my own homeland of Eritrea.

These types of collective kinship support are often ignored (in the U.S.) and are not given the same recognition as those of wealthy white donors and established foundations. Tanda, Susus and Ukub, among others, are truly collaborative because they are authentic, intentional, and consensus-driven.

We need to continue to acknowledge the legacy of community fundraising, where we affirm and give agency to members of our communities, where we work collectively towards an objective and not an end goal. We need to challenge and conquer “-isms” that are detrimental to the transformational work that we do. We need to recognize the impact of traditional practices and collaboration from our communities.

Philanthropy is full of complexities that have contributed to a long history of exclusivity and patronization. Let us demand true collaboration, allowing for a democratic process where all stakeholders, including constituents, can be seen, heard, and honored. This approach produces a more seamless passage into movement building to bring about real societal change. Let us move away from a mindset that focuses on fundraising without collaboration. Otherwise, we’ll be sounding a lot like author and chief defender of colonialism Rudyard Kipling, who once said: “He travels the fastest who travels alone.”

Simply put, we need collaboration in order to inspire advocacy and assert our work so that together, we can go far to create lasting change. 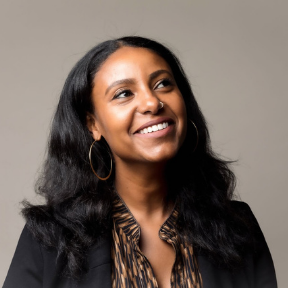 Samra Ghermay (she/her) brings her strong commitment to social justice and human rights to Wingo NYC and their clients, not just as a manifestation of her ideology but as the result of her lived experiences. She is a proud immigrant and Black feminist living in Brooklyn by way of Eritrea. Samra’s career has centered the acknowledgment, inclusion, access, and well-being of historically underrepresented groups. Samra has provided fundraising coaching for Africa-based grantees of the Arcus Foundation and has bolstered the missions of UNICEF, UC Berkeley Horn of Africa Project, Restless Development, Sadie Nash Leadership Project, and President Obama’s Young African Leaders Initiative, to name a few. She also sits on the Board of the Black Alliance for Just Immigration (BAJI). Samra completed her BA in Interdisciplinary Studies from UC Berkeley and an MA in International Affairs with a concentration on News, Media, and Culture from The New School University. She has lived in Eritrea, Mali, and Tanzania and has traveled extensively to other parts of the world. She can be connected with on LinkedIn.