Retired master gardener Rima knows what it means to be least served.

“One of the things I love is telling people I did time,” she says. “What happened to me happened entirely out of rage. Everyone had written me off, the judge and my family. I did two separate crimes, one as a juvenile and one as an adult. So I spent time in both adult and juvenile correctional systems. At my probation hearing, the judge said, ‘You’ll be back.’”

Rima didn’t believe him. Instead, she thought, “I will succeed.”

A Native American, after her release Green paid for college with Pell Grants. After earning two engineering degrees and completing graduate school, she secured a job in the tech sector.

“I had affirmative action in my favor,” she says. “In me, they got three: a woman, a minority, and an ex-felon. HR had an orgasm.”

By way of congratulations, her brother sent her a New York City subway token and a message: “Never forget. You are here because you are a token, and you have to do better than anyone else.”

Being ‘a token’ took its toll.

“I was so angry,” she says. “I was driven to succeed by a sense of rage and distrust that came out of the prison time. I wrecked relationships with my husband and children because I was angry and didn’t trust people.”

Today, Rima has a particular reason for doing the work she does.

“I’m a tough person, and I don’t think anyone should have to go through that. The prison system is still set up to punish more than rehabilitate. Until we rethink incarceration and what we hope to achieve out of incarcerating people, we will continue to release angry people with very little hope of a better life,” she says.

That’s why she began working for an organization that did work supporting prison populations. When that organization merged with Growing Gardens in 2015, she wanted to continue to do her best work, but felt frustrated with its leadership’s approach.

“It trended very heavily to the do-gooder, bestowing our knowledge and help on the deserving poor,” she says.

It was a model familiar to her, not only in the nonprofit sector but also personally.

“Like every mission school, it’s everything that is wrong with the reservation system,” she says. “We’ve had enough experience with the ‘great white father.’ Been there, done that.”

A failure of culture

Amber Baker, who is white, joined the Growing Gardens board in 2016, hoping to offer some perspective on creating community-led, participant-led programs. As the former leader of Village Gardens, another Portland-based nonprofit, she became connected with the organization during their search for a new executive director. Baker knew one of the candidates, Jason Skipton, who had worked at Village Gardens.

During Amber’s second board meeting, Jason, who is white and was newly hired, brought up a request from staff. Staff wanted to post on social media in solidarity with protests marking the second anniversary of Michael Brown’s death in Ferguson, which had gained national attention. Being new, Jason wanted to know if it was something he could approve or if the board needed to be involved.

The board decided that the request fell outside the organization’s mission and scope. They didn’t want to post a statement.

Looking back on that meeting, Amber remembers that the decision upset Jason. And while she spoke up in favor of putting out a solidarity statement, nothing came of it.

“We were a lot of people that didn’t know each other,” she says. As a new member, she was uncomfortable. “It was a Robert’s Rules kind of meeting — dull and long, and nobody said much.”

At another meeting some weeks later, Amber saw what looked like a problem on a report, a significant shortfall. While not a financial person, as a former director of a nonprofit, she had some experience with profit and loss statements — yet, someone with more financial experience said that it was fine.

“I had my own inferiority thing,” she says, and so she let the matter drop.

Not long after, the organization had to let people go. As Amber went on maternity leave, the board voted for closed-door meetings while they made layoff decisions.

Staff members knew that they were doing social justice work, and they also knew that they couldn’t continue with a board working in ignorance and isolation. Change couldn’t wait.

So when two staff members, Rima and Emily Keeler, got the opportunity to attend an Undoing Racism workshop with the People’s Institute for free instead of paying the standard $300 fee, they took it.

“I hate diversity training,” says Rima. “In a lot of cases, it’s a lot of hand-wringing, going over the same ground and then going back to what you were doing before.”

But by the second day, Rima was thinking: “This is the best thing I’ve ever done.”

She and Emily went back to Growing Gardens and said they would each personally pay for another person to attend. More staff members went.

The board was another matter.

“People were confused,” says Amber. “They didn’t understand the point of the People’s Institute.”

But pressure increased, with staff sending a powerful message as they continued to offer to pay for board members to attend.

Over time, as new members joined the board and others left, the new board president participated in the workshop and became invested in getting others to follow. A subset of the board decided to do a presentation to the larger group to clarify why it wasn’t mission creep for a garden organization to address racism.

The combination of pressure from staff and key board members finally turned the tide.

“A couple more people went and had a profound experience,” says Amber. “Then we said, ‘If you want to participate as a board member, you have to go.’”

For over 15 years, Rashae Burns, a Black woman, worked as a healthcare professional doing outreach and equity work related to social determinants of health. In 2017, she needed to make changes for the sake of her own health.

“I wanted to eat better,” she says. “But it was super expensive, so I started looking at gardening.” She found Growing Gardens and signed up.

Rashae loved the program, telling as many friends and family members about it as possible. After eight months of gardening, Emily, who is white, asked if Rashae wanted to join the team as a community organizer (she did.).

And in 2020, Rashae was promoted, becoming the Home Gardens director. When she started, she saw an organization that required everyone to attend Undoing Racism training and one that was asking many questions about how it did its work, from hiring to funding to community engagement.

“I took the training,” she says. “As I engaged with the team, I saw that our leadership was looking for ways to grow in equity and uplift people.”

She and others also pointed it out when they saw inconsistencies. One of those was the expensive-to-attend annual fundraising dinners hosted by well-known chefs in the area. Rashae noticed that a lot of the community organizers weren’t attending. “When I went, I got an uncomfortable feeling of not belonging,” Rashae says.

She talked about it with Jason, telling him, “Our funders don’t know who is doing the work. Do we want funding from people not aligned with our work and our principals? We do anti-racist work.”

“Frankly, I can teach anyone to do Excel,” says Rima. “But I can’t teach people about communities. If you aren’t of a community and blunder in, display your ignorance, and then assume you are doing the right thing, that’s white supremacy.”

In addition to finding more community-centric ways to fundraise and revamping hiring practices based on a different set of values, Growing Gardens continued to evolve its board. Shireen Duke became a new member in 2017.

As a Black fifth-generation Oregonian whose father worked on the police force, she lived the Civil Rights movement. Her family currently experiences gentrification of the neighborhood where they live.

Like Rashae, she came to the organization with no gardening experience. She started as a participant and then became a master gardener. On her master gardener volunteer days, she sat next to fellow volunteer Rima. Soon she joined Rima when Rima went to talk to inmates. Growing Gardens also asked Shireen to evaluate a Sauvie Island program to see if a partnership might make sense.

“I’m that older person, that momma, aunty person, where you talk about vegetables and life and other problems,” she says.

“When you start acting like humans, things change,” says Amber. She credits the People’s Institute for helping her see the way sharing culture helps to undo racism. “What I love about what happened on the board after the People’s Institute training is that staff could come to board meetings whenever they wanted and share their work. We were so effective. People weren’t afraid to ask questions. We’d spend 45 minutes talking and eating and being together and then get to business, and then end the meeting early.”

Today, Growing Gardens isn’t finished or fixed. But now, undoing racism is part of who they are. Tough conversations are scheduled and are frequent, and they have a lot more tools in their toolbox.

“We just had an epic discussion about it yesterday,” says Rima.

“It’s a continuous process,” Jason says. “Every institution in our country is built on racism. We can never check off that box as being complete. We will always have to challenge and push ourselves in new and different ways.”

Rima hopes that the country has reached a tipping point. She’s been saying for years that if people visited prisons, then reform would happen.

“You can’t take one-third of society and say, ‘It isn’t me. It’s not my problem.’ Then you get into ‘Man the barricades!’” says Rima. “We take ourselves apart when we start doing this. We cut ourselves off from good things when we deny people’s experiences and stories and history as not being relevant to us.”

“We’re using gardening as a catalyst to build relationships and see people for who they are,” says Rashae. “It’s the cultural aspect of growing, sharing out to the community and the community shares back, learning about differences, taking those learnings and implementing them into life.”

Editor’s note: Jason Skipton is the brother-in-law of this essay’s writer, Alice Skipton. 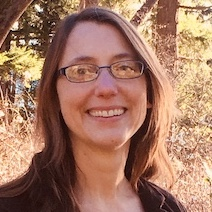 Alice Skipton (she/her) creates strategic content for mission-driven organizations. Connect with her at Skipton Creative or on LinkedIn.