“What are you again?” (Not your token Brown friend, that’s for sure!)

The necessity of authenticity in building personal and professional success

I often found myself the only brown face in a sea of whiteness.

When I was about seven years old, I remember staring hard at my little brown face in the bathroom mirror of my family’s mid-century modern home.

My parents immigrated to the United States from India in the 1970s and chose to purchase their first home in a suburban municipality west of St. Louis, Missouri. To both the south and west of our subdivision were mostly white communities — to the north and east, mostly Black and immigrant Asian and Pacific Islander communities. If you’ve learned anything about St. Louis in the six years since Mike Brown’s murder, you are familiar with the deep segregation of our region and its toxic, implicit commitment to the Black-white binary.

So, I stared and stared, trying desperately to answer the question of where my brown face — the face of “otherness” — could feel belonging.

This feeling persisted, from grade school through high school, college, and my graduate program. I often found myself the only brown face in a sea of whiteness.

“Where are you from?”

This reality of my internalized racism was okay — until the day it wasn’t.

These questions from white people littered many conversations. My responses often elicited more bewildered inquiries, as if my existence did not make sense. I learned how to handle and, ultimately, avoid causing white discomfort. I learned how to make them feel at ease — I learned to laugh with them at the absurdity of me not fitting within the Black-white binary, at the conundrum of being Brown and raised Catholic, at the ‘unconventional’ truth of my multicultural family, which included a Jamaican auntie, a French auntie, and lots of multiethnic cousins.

This reality of my internalized racism was okay — until the day it wasn’t.

Something’s not quite white

I started my fundraising career working for the affiliate of an internationally known nonprofit organization. The vast majority of our donors across every category were white and Christian, and they often responded favorably to my solicitations for support.

Without skipping a beat, I positioned myself close to whiteness and mastered the art of keeping my face frozen in a charming grin as they shared overtly racist stories and revelled in white saviorism. I would push down my own feelings of discomfort in order to celebrate getting a contribution to support our organization’s efforts. I believed this was what it felt like to love your job.

After giving birth to my son and surviving a rare postpartum complication, I decided it was time for a new job. In the heat of the summer, I stuffed my postpartum mama body into the only suit that fit and headed to an interview with the founder of a local education startup.

To my surprise, the organization’s founder was a Black woman dressed in sandals and a lightweight outfit that showed off her tattoos. Sections of her hair were a beautiful burnt orange and her braids fell to the middle of her back.

Looking back, I realize I was waiting for her to qualify her appearance with some justification.

And yet, she never did. She never apologized for being anything but her full self.

I was aghast. Horrified.

I sat in my car for at least 20 minutes trying to make sense of this interaction.

And it started out as quite a relief when days, then weeks passed, and I didn’t receive the call for a second interview.

As it turns out, the founder had just taken time off — a trip to her hometown with her children — and as soon as she came back to town, she called me. Both a second and a third interview followed, and I felt a confidence that was new and comfortable all at once. I was not “other” or less that. I was the fit. I was enough. I am enough. And I know I could be more.

When I was offered the job, I happily accepted it and began my journey of discovering how to be my true, authentic and full self at work and in life.

I started doing stuff like holding space for myself to talk about being married to a white man and being the proud mama of a multiethnic son. I began creating boundaries that respected my work time and my home time, and I gave myself permission to show up to work as a mama and at home as a badass development professional.

Pride in my motherhood made me better at my job, and pride in my work made me a better mama.

I also allowed myself to be vulnerable and uncomfortable as I explored how I internalized racism and sexism. I began participating fully in hard conversations. I experienced discomfort as I allowed myself to question the ‘hows’ and ‘whys’ of my professional journey. And I did my best to listen.

I had no idea that I could excel in my job when I made a conscious decision to start dismantling the hold white supremacy culture had on my career.

I started taking my time with all donors and celebrating generosity of all sizes and shapes. I started allowing for vulnerability with prospects and built transformational relationships where giving felt as exhilarating as receiving. I started protecting space for the variety of my intersectional identities and maintained sole control over my boundaries.

I’m pretty sure I failed hard and often — but I had a boss who encouraged and accepted it and pushed me to level up from what failure taught me.

And I am successful. I AM SUCCESSFUL!

To show up as our authentic selves, we have to be willing to:

When I give myself permission to show up as my authentic self, I also grant permission for my colleagues and friends to show up as themselves. This has led to joyful and surprising connections that are so much more meaningful than staying small. These connections create opportunity for silo-busting, radical collaboration, and vision-level impact.

Saying, “What if?” is not a pipedream — it fertilizes the soil with conditions for equity and justice.

Our collective movement towards justice doesn’t always start with burning down systems — sometimes, we must start by turning our equity lens inward and modeling what we seek. When we choose to show up as our authentic selves — without flinching or shrinking — the justice we seek for the world finds its roots. But we cannot and must not stop there. We can turn into the sun, we can trim back and prune ourselves as necessary, and we can thrive.

My full, authentic self has built development departments and teams. She started a thriving business and has consulted with nearly 80 local nonprofits. She has been a part of raising tens of millions of dollars to support organizations focused on racial equity. Sometimes, she has tried and failed — and transformed that failure into resilience.

Since deciding to be fully authentic, she has never — not once — had to stare at her Brown face in the mirror and wonder where she belongs. 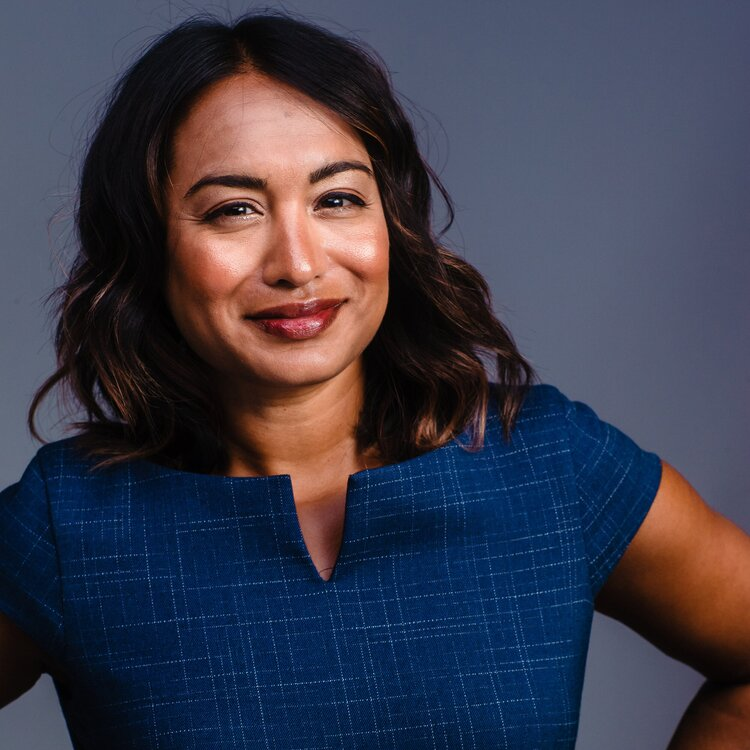 Rachel D’Souza-Siebert (she/her) is the Founder+Principal of Gladiator Consulting in St. Louis, Missouri. Through Gladiator, Rachel has combined her knowledge of organizational culture and fund development with her deep personal commitment to centering community, seeking justice and creating belonging for those who have been disenfranchised or targeted by institutions, systems, and policy.

Born to parents who immigrated to the U.S. from India, Rachel has always been passionate about bridging differences and celebrating what’s possible when we collaborate from a mindset of abundance, learning, and risk-taking. Rachel loves cooking, snuggling her kids, and Instagram.