NONPROFIT PROFESSIONALS ARE UNHAPPY WITH FUNDRAISING

*BIPOC stands for Black, Indigenous and People of Color

(The following section is visualized through a brown box wrapped around the following text:)

The majority of nonprofit professionals are unhappy with fundraising in the nonprofit sector.

Two-thirds of white fundraisers are unhappy

Three-fourths of BIPOC fundraisers are unhappy

(The following section is a new section. It features introductory text and then a dark green box with a bulleted list in white writing and yellow arrows as the bullets. It says:)

WHY FOLX ARE UNHAPPY

Although the 2019 survey did not ask respondents to qualify why they were unhappy, a CCF Summit held in August 2018 gives insight into challenges BIPOCs face with current fundraising practices. When asked what wasn’t working in fundraising, BIPOC fundraisers at the summit mentioned a variety of concerns. These include:

(The following section is a new section. It takes about the demographics of respondents surveyed and is a mix of color graphs and charts along with accompanying text.)

(Here, there is a dark indigo pie chart showing that 84% of respondents were white and 16 percent of respondents, shown as a pink wedge, were BIPOC.)

(Next to the BIPOC percentage, there is deeper-dive information. There is a breakdown of ethnicities of respondents who were surveyed. The list is shown as a bar graph in descending order, from highest percentage to smallest percentage. The list says:)

Nearly all respondents live in the United States (white 94%, BIPOC 95%). People outside the U.S. represent 26 countries, with the largest representations coming from Canada, United Kingdom, and New Zealand.

(There is a brown pie chart here that has a dark indigo wedge in it. The chart shows that nearly all respondents were from the U.S.)

(There is a small pink line graph here featuring two data points with the word “white” over the top of both graphs. The graphs show:)

(There is a small indigo line graph here featuring two data points with the word “BIPOC” over the top of both graphs. The graphs show:)

(The next subsection is titled “Career Roles” and features bar graphs in multiple colors, showing what jobs white respondents and how BIPOC respondents hold in nonprofit.)

People who responded to the survey identified their main work roles, with the majority of respondents holding fundraising and/or leadership roles*.

*Totals exceed 100% as folks could select more than one role.

Additional roles beyond the top 5 highlighted here include:

72% of BIPOC respondents and 82% of white respondents said they do fundraising as part of their role.

(The last subsection is titled “Length of Experience” and features bar graphs in multiple colors, showing how long respondents have worked in nonprofit.)

Of those who do fundraising, BIPOC respondents have been doing so for less years than their white counterparts.

(The last part shows two sets of pie charts, depicting the difference in years of experience between white respondents and BIPOC respondents. The pie charts are in dark indigo and brown.)

5 YEARS OF EXPERIENCE OR FEWER

Nearly half (44%) of BIPOC fundraisers and one-fourth of white fundraisers (25%) have engaged in fundraising for less than five years.

11 YEARS OF EXPERIENCE OR MORE

In contrast, nearly half of white fundraisers (43%) and one-third of BIPOC fundraisers (31%) have engaged in fundraising for 11 years or more.

(The very bottom of the infographic shows the CCF logo on the left hand side. On the right hand side, it says: “© 2020 Community Centric-Fundraising” and “Infographic design by Stacy Nguyen.”) 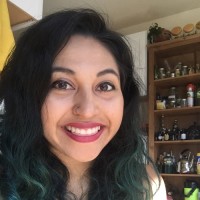 Anna Rebecca Lopez (she/they) is an experienced Evaluator and consultant, using mixed-method approaches to social science research, statistical analysis, community engagement & collaboration, digitization and more. She is the Principal Evaluator at AR Lopez Consulting, where she specializes is disaggregating data in a way that tell authentic and useful stories. You can find her on IG @anna_.rebecca