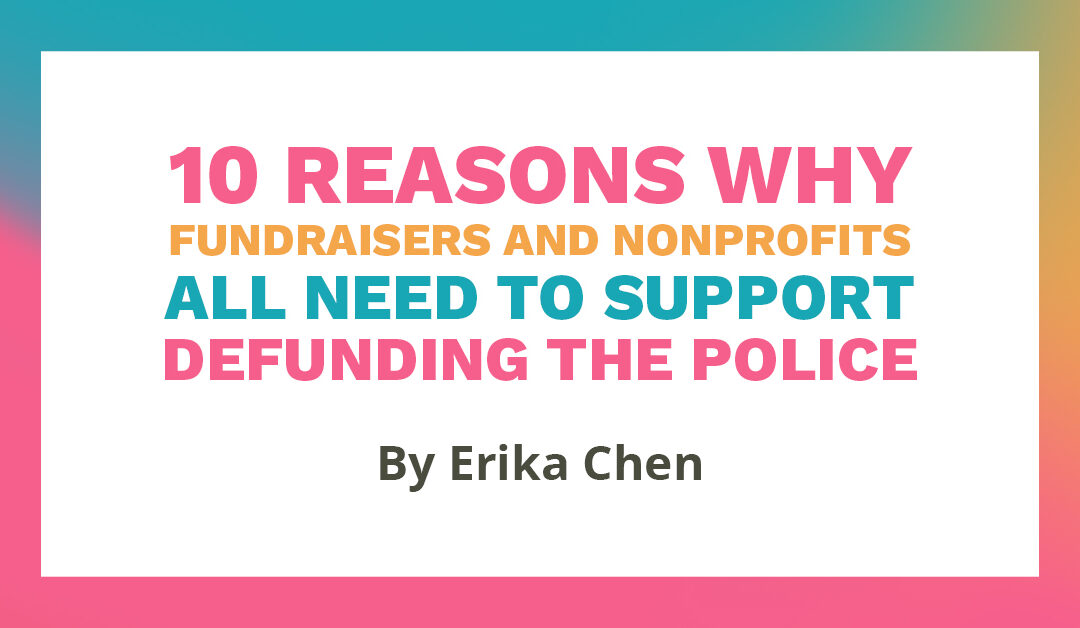 Following the murder of George Floyd and the ensuing people’s uprising, our local Black-led organizers here in Seattle have distilled our current goals to the following three demands:

All around the country and the world, many communities are adopting similar demands to defund the police.

Here’s why you personally, as a fundraiser, should support defunding the police and why you should encourage all organizations with which you are affiliated (as staff, board, volunteer, donor) to also support this movement.

Black Lives Matter is more than a hashtag. It’s a movement. If we as fundraisers and nonprofit organizations care about equality, then we need to care about equity. And we need to listen to, support, and amplify Black voices. Organizers and activists around the country have been fighting for Black lives for years.

Whether we have been in the fight or new to it, we must continue to educate ourselves around how we are complicit in anti-Blackness, and we must support Black organizers who are calling to defund the police. They understand too well the reality of police violence. They are telling us that the first step is making sure the truth that Black lives really matter is clear, and they are asking for our full support. Defund the police.

We all think of ourselves as “good” people. We think about different periods in world history and imagine that we would be on the “right” side. We are currently living through one of these pivotal moments in history.

We have the opportunity to restructure our communities. By supporting defunding the police, we can support funding basic needs, housing, education, physical and mental healthcare, and more.

3. Reinvest in Black communities through reparations

The nonprofit sector and, in particular, mainstream fundraising/philanthropy do not have great track records of supporting and listening to Black, Indigenous, and People of Color (BIPOC) in fundraising — even when they are our co-workers, neighbors, friends, and family members. In fact, the sector has systematically ignored BIPOCs’ input and/or actively retaliated against BIPOCs who call attention to racism or try to enact change.

If we as a sector want to make amends and repair the harm that we have caused, one place to start is looking in the mirror and reflecting on our own complicity and silence around state-sanctioned violence against Black people. By supporting defunding the police, we can begin two types of reparations — repairing relationships with Black folx in our lives as well as endorsing monetary reparations via rerouting public funds and reinvestment in Black communities.

4. The words ‘defund’ and ‘invest’ need to go together

It’s not a coincidence that the demand to defund the police is focused on repositioning money and funding. As fundraisers, we know the importance of money. We are comfortable talking about money and how having it or not having it can make or break a program, a person, or an organization. We exist within capitalism, and money is essential to our survival. It also dictates power and behavior.

Right now, money is giving too much power to police and not enough to our Black communities. There needs to be a shift in funding priorities. And who understands the power of moving money better than us, fundraisers? We work every day to move money to where it can affect positive change.

This is what Black organizers are asking us to support. We should not only support the concept, but we should be invested in doing the work ourselves daily. Move money to Black-led community solutions. This is our job. Period.

As nonprofit professionals and especially as fundraisers, we know this. Values can be stated, but if our values are not prioritized in budgets, our values are meaningless. Budgets and financial statements clearly show what values are being prioritized. So, we must see the value that Black Lives Matter in our community budgets.

Currently, most municipality budgets prioritize police violence. (Seattle, for example, is spending $409 million on the police, which is over a quarter of the general fund.) It is time to reprioritize.

6. Listen and follow the lead of those most directly affected

Our Black community organizers and leaders are asking us to support these demands. They know the problems they face better than anyone else. They have been facing them and fighting for centuries. This is how they are asking us to show up. This is a step toward preventing further violence and injustices.

Black womxn in particular have been long time leaders in this movement. While their contributions have often been hidden in the past, it is time that we embrace their knowledge and power. Their lived experiences at the intersection of so many forms of oppression gives them unique awareness of the systems designed to perpetuate injustice, and therefore, they can see the path forward toward equity. Black womxn should be listened to, followed, and paid for their physical and emotional labor in this movement. We would not be where we are without them, and we won’t get to where we need to go without them.

Responding to social problems is the work of the nonprofit sector and what we as fundraisers are trying to move money toward. Black leaders have been doing everything possible to make a case statement for their actual lives. We need to listen to their lived experience, not just videos of their deaths. We need to join them in the fight for their lives. Everyone deserves to live.

It is a societal problem that Black people are being murdered by police. It is a societal problem that whole communities do not have adequate resources when they are in crisis. It is not surprising that many communities do not feel comfortable calling the police for aid. The police are not trained in areas like mental health, drug interventions, or domestic abuse — and they shouldn’t be.

We should not invest money and time into training a violent police force to meet community needs when:

They have proven they cannot and will not stop killing Black people, and
There are already programs and people in the community who are better equipped to meet these social needs, people who will not inflict violence on the Black community.

We need to support community-led solutions. We already work everyday to raise and move money for these solutions, so we should support the city routing additional funding and resources to ensure community safety.

There are some professions in which employees should be working to put themselves out of a job. For example, oncologists and cancer researchers are working to eradicate cancer. Of course, once they succeed, they will be out of work. But wouldn’t that be a wonderful world?

Would you be surprised if I told you that this is something nonprofit professionals and police also have in common? Nonprofits also envision a better world where we are no longer needed. We have a vested interest in the continuation of societal problems, and although we consciously want to end these problems, many of us, like the police, are still in denial that the world could (and arguably, should) exist without us.

Between 0.5 and 1.8% of 911 calls are regarding violent crime (Seattle 1.3%). This should be seen as a success. Police should celebrate the fact that they are actually not needed. Demand for police is actually quite low, so supply should follow. There are other first responders who are better trained and equipped to answer the majority of 911 calls, and this is where funding should be redirected.

9. Capitalism supports systemic racism — and this must be changed

Modern/mainstream philanthropy and the nonprofit sector as a whole has developed and grown because of capitalism. The rich make profits and grow their generational wealth by exploiting workers, which has led to extreme income and wealth disparity as well as the overwhelming number of social problems that go along with tax cuts for the rich and decreasing federal investment in education, affordable housing, healthcare, food, and so much more.

In all categories, we know that Black folx, in particular, experience the most disenfranchisement.

Enter the “saviors:” nonprofits and philanthropy. Nonprofits are doing their best to balance the scales, but our entire sector exists because our economic system and our government are doing what they were designed to do — make the rich richer and the poor poorer.

Capitalism and systemic racism go hand in hand. Defunding the police is one small step toward changing our systems to put money into healing Black communities instead of criminalizing them.

10. And remember that this is just the start

Throwing your support and energy behind defunding the police is one small step we can take on a long journey toward racial and economic justice. BIPOC fundraisers and movers of money will hopefully not only be a part of this, but also will need to be leaders in the discussions, planning, and execution of this shift in funding priorities.

We are here to read, research, listen, support, amplify, donate, and most importantly act. Make anti-racism part of your daily routine, in all facets of your life. Let’s go!

Erika Chen (she/her) is a founding member of the Community-Centric Fundraising Seattle Chapter. She also volunteers her time as the Appeals Chair for the Seattle Human Rights Commission and as Vice President of Diversity, Equity, Inclusion, and Access for AFP Advancement NW. She is a consultant focused on racial equity within nonprofit operations and organizational culture, with an emphasis on inclusion and employee happiness. She can be reached on Twitter at @erika_chen and on TikTok at @erikalianchen.